Poplarville’s Board of Aldermen want more greenery at Love’s 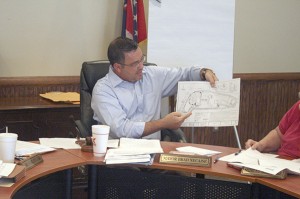 PROPOSED PLAN: Poparville’s Mayor, Brad Necaise, showed board members how the developer is requesting permission to reduce the number of trees at the proposed Love’s Travel Stop.
Photo by Jeremy Pittari

Poplarville’s Board of Aldermen discussed the cancellation of a duplex development, construction of a new truck stop and dealing with blighted property at Tuesday’s meeting.
The developer, J&L Properties, requested zoning changes on property he owns in order to build a set of duplexes. During a recent Planning Commission meeting the developer met with resistance, said Mayor Brad Necaise.
During the Planning Commission meeting about 40 residents from the area showed up to express concerns about the developer’s previous work, and the fear that the duplexes would bring in college students, negatively affecting the neighborhood, Necaise said.
After hearing the opposing comments, the developer withdrew his request and left the meeting, Necaise said. The board of aldermen approved a motion to acknowledge the Planning Commission’s report on the matter.
The board also discussed the development of a Love’s Travel Stop at the intersection of Highway 26 and Interstate 59.
Landscaping was discussed because the developer is requesting permission to decrease the number of trees from 500, to 118 shrubs and about 89 trees on the 12-acre site.
“It’s nicely done. However, I’m going to tell you, it needs a few more trees,” Necaise said.
The Mayor also informed the board that a large live oak is on the property that has to be removed. While the developer looked into the cost to move and replant the old tree, which survived a number of hurricanes, in another location, that job was price prohibitive. Necaise said the projected cost was about $250,000.
The board approved a motion to approve the plan, contingent that the developer add more shrubs and other greenery.
Some blighted property in the city was addressed as well. Guy Ray Holsten, with the code enforcement office, informed the board that a local property owner is interested in demolishing a house on Camelia Drive, which an elderly resident currently lives in. The home is in a bad state of repair, and is suspected to have black mold inside and out. The owner would like the city’s fire department to consider using it for fire training, after which the owner would be responsible for disposing of the remaining debris.
The board decided to gather more information on the matter before making a decision at Tuesday’s meeting.
Another piece of property will be used for fire department training however. The board approved a motion to use the home located at 109 East Orr Street as fire control procedure practice. Alderman Byron Wells said it was an action he has waited seven years to see.
The next meeting of the board will be Aug. 19, at 5 p.m.