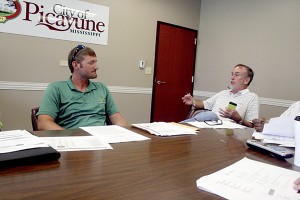 City of Picayune officials have two choices when it comes to next year’s budget, cut services or raise taxes.

City Clerk Amber Hinton said the city is expected to be short of keeping the budget in line if cuts are not made, or if taxes are not raised.

That is without providing the recreational and cemetery departments with the extras they requested. Hinton said if those requests were filled then the city would be $370,000 short.

Even without granting any additional requests to departments, Hinton said the general fund is expected to be about $67,000. She attributes the shortfall to be in part due to court fines not being paid. Council member Wayne Gouguet said he has noticed that some people decide to spend time in jail instead of paying their fines, which puts a burden on city taxpayers who have to feed the inmates during their stay.

“It ends up costing us a heck of a lot more than they probably owe us,” Gouguet said.

City officials opted to talk with the police department and court clerk to gather more information on that matter.

The city is also looking at another issue, increases to employee insurance. Hinton said insurance premiums have gone up, and the city is left with two options. They can absorb the extra expense at the cost of cutting services elsewhere in the city, or have their employees pay extra. The maximum amount the city can pass on to the employees is $148 per month, Hinton said.

Hinton said the problem is that the premiums went up by 40 percent, and even though they contacted their broker for a better rate, the rate still increased by $65,000 compared to the previous year’s.

Council member Larry Breland sees a problem with cuts of any kind. If they have the employees pay more for insurance, then they risk losing good employees; the same is true if they conduct staff cuts and put more workload on the remaining staff.

“We need to try to keep the people we got,” Breland said.

Hinton said the employees can opt out of the plan, but since the rate is based on participation less enrolled employees means even higher premiums.

As the possibility of a tax increase was discussed, Pinero said it seemed that no matter what, the city’s employees will have less money in their pocket. Either the city will have to increase ad valorem taxes, or they will have to pay more for health insurance.

In spite of the bad news, council member Tammy Valente tried to keep a positive outlook, saying she is holding out hope. She knows that City Operations Director Harvey Miller is working hard to promote economic development.

“I still like to be an optimist and hope sales tax goes up as well,” Valente said.

Valente, who is a real estate agent, said she has noticed housing sales have increased.

This story is the first in a multipart series that will cover Monday’s budget workshop. See Wednesday’s edition of the Item for continued coverage.

A public hearing on the budget is expected to be held on Aug. 19th, where residents can voice their opinion on the budget.