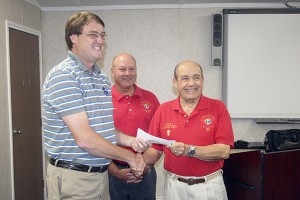 DONATION: Representatives with the local chapter of the Knights of Columbus presented the Pearl River County School District’s Special Education department with $2,000.
Photo by Jeremy Pittari

The Pearl River County School Board of Trustees approved a motion to alert the Pearl River County Board of Supervisors that they have no intention of building a school on 16th section property near Interstate 59 anytime soon.
Superintendent Alan Lumpkin said it’s not that the district does not want to build a school there, it’s the fact that there are no funds to do it at the present time.
The property is located in an area the board of supervisors is looking to conduct a proposed road project that would connect West Union Road to Anchor Lake Road in order to provide better access to I-59. The road, if constructed, would allow the school district easy access to the property should they decide to build a school there later, without the added expense, Lumpkin said.
Lumpkin said if the board did decide to build a school there, it is unknown what grades would be taught at the location. Traditionally high schools cost more than elementary schools, but the high school in the district is the oldest building.
Lumpkin said it might take a bond issue to provide the money needed.
During Monday’s school board meeting the board approved a motion to send a letter to the board of supervisors saying they don’t intend to build a school there at the present time.
In other business, the district received a donation of $2,000 from the Knights of Columbus to be used by the district’s special education department. Knights of Columbus members Bryan Cassagne and Ron Sperier said the funds were collected through Tootsie Roll can shakes held in Picayune. The money raised is not only donated to the PRC school district, but also to Picayune school district.
“We ask for a donation and give you a Tootsie Roll, we’re not selling Tootsie Rolls,” Sperier said in jest.
The school board also approved a motion to set the season pass rates and at the gate rates for sporting events.
Season passes for students will be $30 and adult passes will be $50. Those season passes apply to all home games, but do not include playoff or championship games, Lumpkin said. At the gate prices went up by $1 to $6 per game.
The next regularly schedule meeting will be held September 1, at 6:30 p.m.