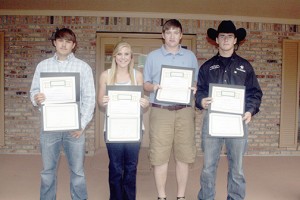 STATE CHAMPS: Four of the five Poplarville residents that took home state titles in the Mississippi High School Rodeo competition were honored by the Poplarville School District. From left are Clay Brown, McKinsy Harris, Chase Graves and Brandon McBride. Not pictured is Marcus Theriot, who does not attend the school district.
Photo by Jeremy Pittari

Those four students were recognized by their principal, John Will, during Monday’s school board meeting.

McKinsy Harris won the state title in the Barrell Racing event. She said she took home a trailer, saddle and a belt buckle for the win.

Chase Evans placed first in the Team Roping Healer event. He also went on to place second in that event in the national competition, missing first place by a fraction of a second, Evans said.

And Clay Brown took home the state title in the Saddle Bonc Event.

Will commended his students for their efforts in the competition.

Students were not the only ones to be recognized. The district’s superintendent, Carl Merritt, was recognized by Mississippi Association of School Superintendents Executive Director Sam Bounds for his service on their board of directors.

“He has shown outstanding leadership,” Bounds said. “Our future sits in those classrooms everyday.”

In school related business the board approved a motion to purchase a new school bus. Merritt said their maintenance department does a good job keeping the buses in good shape, but after a certain mileage they need to be replaced. Purchasing this bus will allow the district to cycle out an older bus and ensure the students are receiving reliable transportation to and from school. The board approved the purchase.

District Director of Finance Samantha Sandifer presented the board with some policy revisions and one addition. The revisions focused on FMLA guidelines concerning military service, while Sandifer suggested adding a policy concerning fraud and abuse.

A motion concerning the request for ad valorem taxes from the county was approved by the board. Sandifer said the district will be requesting about $10,000 less than they did the year before.