Hornets kick off season with win 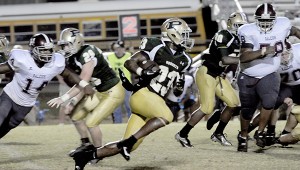 Poplarville High School’s Hornets started the football season out with a win against the visiting Raleigh Lions.

Ending with a score of 31-6, the game was almost a shutout.

But in the fourth quarter the Hornets lost their steam and allowed Lions quarterback Justin Gammage to complete a 20 yard pass to tight end Isaiah Keyes. They missed the extra point, however.

The first three quarters were all Hornets.

In the second quarter, Hornets  running back Malick Lucas ran the ball from their 29-yard line for a 71 yard touchdown, an extra point put the score at 24-0.

The first score of the game was a field goal that took place with 4:21 left in the first quarter, which came after a 15 play drive to the end zone utilizing three first downs.

The Lions lost the ball to a series of failed plays and punted the ball back to the Hornets, after which the Hornets drove the ball in five plays and two first downs to allow Lucas to make a 21 yard run back to the end zone, putting the score at 10-0 with 1:04 left on the clock.

An interception in the second quarter gave the Hornets possession after four plays by the Lions.

The Hornets would use that turnover to their advantage; 11 plays later wingback Anthony Martin ran the ball 13 yards for a touchdown that brought the score to 17-0 after a successful extra point kick.

The Lions would only have the ball for seven more plays before a fumble put the ball back in Hornets’ possession.

Four plays later Lucas made that 71 yard touchdown run that put the score at 24-0.

A set of Lions and Hornets  turnovers and a quarterback sack by Levi Mitchell brought the first half to a close.

The Hornets would not score again until the fourth quarter, when Lucas ran 15 yards for another six points. The extra point brought the score to 31-0.

But the Lions were not content to end the game without putting points on the board.

Close to the end of the game Gammage made the successful pass to Keyes, the only completed pass the Lions quarterback made all night.

“We played hard in the first half,” Poplarville Head Coach Jay Beech said. “Then we had some miscues and we got tired.”

Beech said those issues caused them to miss some points they could have added to the scoreboard.

But overall he felt it was a good game and he gave the Lions credit for playing hard.

Over the next week Beech and his Hornets are going to work out some cramping issues the team faced Friday, and will prepare for Friday’s match up against the Pearl River Central Blue Devils. The Devils will host the Hornets.

“They do a lot of the same things we do,” Beech said. “We will see if can do it better.”