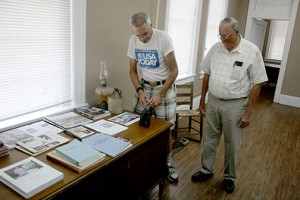 Members of the Pearl River County Historical Society are working with city of Picayune officials to establish a county museum.

Vice president Jerry Stough said they are looking for any historical artifact that could be representative of life in the county from the early 1700’s to the present.

The organization will also accept any artifacts left behind by previous Native American tribes.

So far local residents have donated some old logging artifacts such as handsaws. They also have a cowhide chair that used to belong to president Juanita Gex, an old flat iron and a kerosene lamp, to name a few.

While ownership of most of these items cannot be traced to Pearl River County residents, they are indicative of life in decades and centuries past.

However, if the donor can prove the item was used within Pearl River County, it would make the artifact that much more significant to the museum.

While not hundreds of years old, an old scale used to weigh nails at the now shuttered Thigpen Hardware was donated to the museum by heirs of the store’s owner after it closed.

In order to display the items, Stough said he intends to build some cases similar to those used at the Pearl River Community College Museum.

Other items the museum is looking to procure include old clothing and uniforms. Gex said one donor gave them a historic wedding dress they intend to display in the museum.

The museum will be established on the third floor of Picayune’s City Hall on the historic side of the building. The use of that part of the building was donated to the PRC Historical Society by city officials. Gex said the city is also donating the cost of utilities for a period of three to five years.

“We are grateful to the city for doing this,” Gex said. “We would not be doing this had it not been for the generosity of the city’s administration.”

In the meantime the society needs to secure some financial backing in order to build the cases and protect the artifacts while they are on display.

Stough said that will involve controlling the humidity, temperature and the amount of ultraviolet light that comes into the museum. They are hoping to be able to raise about $5,000 to cover those costs.

“In south Mississippi you have to be able to take care of that 90 percent humidity,” Stough said.

While air conditioning can take care of the temperature and dehumidifiers can remove moisture from the air, it will take special window shades or a specially coated Plexiglas to protect the artifacts from the UV light.

As the museum becomes established the historical society hopes to be able host educational programs for schools and find volunteers to help man the museum.

Volunteers will be needed in the near future to help with the manual labor required to set up the museum.

For more information on how to donate time, artifacts or money contact Bill Roberts at 601-749-0910.