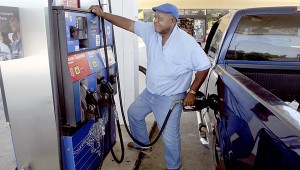 FILLING UP: Hilton Williams was filling up his truck Friday afternoon. Gas prices have fallen slightly in the past few months, but a gallon is still more than $3.
Photo by Jeremy Pittari

Gas prices in Picayune vary depending on the station, but appear to be going down slightly.

The lowest price per gallon in Picayune can be found at Murphy’s near Walmart, and Pure Country on Miss. 43 S.

Both stations are selling a gallon for $3.10.

Roadrunner on the corner of Palestine Road and Beech Street and the Shell at exit 1 in Nicholson are asking the most for a gallon of gas, $3.25 and $3.27 respectively.