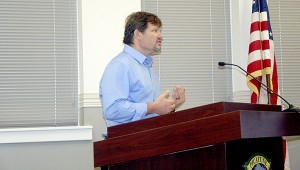 PLEADING A CASE: Local business owner Tyron Gill pleaded with the Picayune City Council for a tax break on his airplane sales business during Tuesday’s meeting.
Photo by Jeremy Pittari

Tuesday’s Picayune City Council meeting covered a new ordinance that would allow the sale of beer at events held at the newly named Crosby Commons, and also heard a matter concerning Tyron Gill’s business and its back taxes.

Planning and Zoning Director Diane Miller spoke to the council about an amendment to the open container ordinance that would allow the sale of beer and light wine during special events at the Goodyear Boulevard green space, which was named Crosby Commons during the meeting.

Miller said in order for beer and light wine to be sold at the location, the event planner must first acquire an event permit, and also apply for a separate permit so a licensed beer vendor could sell the beverages.

City Attorney Nathan Farmer said the city has the legal backing to make the change through legislative laws.

Miller said any event planned at the green space would also have to abide by the city’s noise and litter ordinances.

City Manager Jim Luke said security at the events would be provided by off duty police officers, and be paid by the event holder.

Just before the council approved a motion to accept the change, First Baptist Church of Picayune pastor Keith Warden asked to say a few words. He told the council that the amendment to the open container ordinance left a bad taste in his mouth because of the already existing loopholes left in the city’s resort ordinance, which are in the process of being addressed, and the fact that the green space is across the street from schools and near two churches.

After Warden voiced his concerns, the council approved the amendment to the ordinance.

Local business owner Tyron Gill expressed his opposition to the council being advised to deny tax exemption to his wholesale airplane sales business because it did not fit the description of a fixed base operation.

After spending more than 30 minutes pleading his case concerning alleged unfair treatment, he asked for a break on the more than $60,000 in back taxes he owes to the county and Picayune School District due to non payment of taxes over the past four years.

He’s noticed other businesses at the airport, such as Phillips Aviation, Cloud Nine Aviation and The Way Industries, have received fixed based operator status, thereby exempting them from taxes, but his business is still being taxed.

Gill said his business purchases airplanes and resells or leases them. However the downturn in the economy has caused the value of the planes he has on hand to depreciate in value. If he sold them now he would lose hundreds of thousands of dollars.

After Gill’s long speech, Farmer informed Gill that the reason the other three businesses were granted exemption was because they provide a viable service to the community and they went through the steps to receive that exemption.

Airport Manager Andy Greenwood said he suggested the council deny exemption based on several factors. Greenwood cited a letter from a previous pilot of Gill’s, which stated that Gill’s business did not buy and sell aircraft on a regular basis, which made the business ineligible to be classified as a fixed base operator, and thereby receive tax exemption.

Greenwood also said that Gill failed to come to the council when the business was established to secure that designation. Additionally it was mentioned in the meeting that Gill was living in the T-hanger for a time. Gill admitted he lived there off and on while going through a divorce.

Mayor Ed Pinero said that since Gill waited until the last minute to bring the matter before the council, and based on the limited information he provided, the council would be unable to make an informed decision.

Farmer said since matter did not receive the required four votes, it failed, which meant the exemption was denied. As with all council decisions, Gill has 10 days to file an appeal with the Circuit Court, Farmer said.

See Saturday’s edition of the Item for council discussions on the status of an investigation into alleged officer abuse, and other matters discussed during Tuesday’s meeting.