Bird of prey found in bush, taken by SPCA to rescue 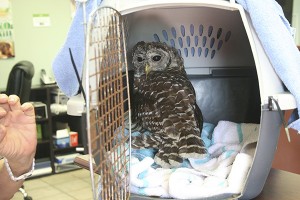 INJURED BIRD: This juvenile owl was found on Buckley Place Road Thursday by a community member who thought it was one of her chickens. Instead she found an injured bird of prey.
Photo by Jeremy Pittari

Pearl River County SPCA employees rescued an owl on Thursday morning and brought it to a Gulfport refuge.
PRC SPCA Director of Community Outreach Rhonda Furby said they received a call about the injured bird of prey that day after a community member saw what she thought was one of her chickens in a bush near her home.
Thinking one of her animals had escaped its enclosure, she investigated flapping wings in the bush to find the injured owl. Closer inspection of the owl Friday morning found the bird still had some baby feathers on it’s head and neck, leading Furby to conclude that he is a young owl.
While collecting the owl the staff met with some hostile yellow jackets, but they were able to corral the bird into a pet carrier.
Friday morning they brought the young animal to Wild at Heart Rescue Inc. in Gulfport, where several months ago the staff also brought a hawk.
The local SPCA does more than just rescue injured birds of prey. They also offer many adoptable dogs and cats.
Between Aug. 19 to 23 the SPCA will adopt kittens older than four months for $45, and select cats can be adopted to forever homes for $30.
Furby said select cats are those who have been at the shelter longer than others. All dogs and cats adopted from the shelter have had their shots, been microchipped and are spayed or neutered. The shelter also offers coupons for low cost spay and neuter.
The local shelter also participates in the Rescue Waggin program, where sought-after dog breeds are trucked to northern states where spaying and neutering practices have reduced pet availability. This program not only finds homes for dogs in other areas of the country, but also helps reduce the pet population in the shelter.
According to SPCA statistics, the local SPCA has sent 1,242 dogs to other states so far. They are waiting for word on another shipment, which could be as many as 40.
A fundraiser is planned to take place soon, but the details are still being ironed out. The fundraiser will be in cooperation with Schwan’s, who for the first 30 to 45 days will donate 20 percent of the proceeds collected from orders that entailed a special order code. For a year after that, Schwan’s will continue to donate five percent of those purchases to the shelter. The fundraiser will help the shelter with operating costs. More information will be released when it is available.
Be sure to check out their website at http://prcspca.org/ for information about the pet of the week, or other adoptable pets and programs.