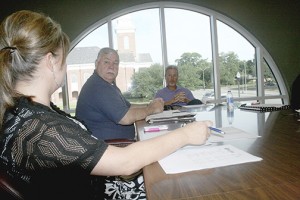 WORKING IT OUT: Council members and city administrators held a budget workshop Monday to hear about the proposed budget and presentations from department heads.
Photo by Jeremy Pittari

Several departments within the city of Picayune have requested additional funding, but everyone was denied due to lagging revenue.

Council member Larry Breland said he is concerned that the cuts to emergency response departments will have a negative impact on the city. He used an $84,000 cut to the police department as an example.

Mayor Ed Pinero Jr. said the cut Breland referred to affects the department’s management, and will not negatively affect the daily and nightly patrol.

City Manager Jim Luke said part of that cut has to do with attrition through the retirement of Maj. Ricky Frierson.

“The last thing we want to do is reduce patrol,” Pinero said.

Luke assures the public that fire trucks will also still respond to emergencies.

“We have a tight budget,” Luke said. “We will look at all areas before we make a decision on what and how much to cut.”

During the workshop a few departments met with city leaders to present reasoning behind their requests for more money.

Airport Manager Andy Greenwood said he needs additional funding to fix a number of facility issues. He said due to rumors of a UAV company possibly locating at nearby Stennis Space Center he would like to make the airport as marketable to possible.

Fixes include broken fence lines, better security gates and work to the taxiway and drainage barriers to keep wildlife off of the runway. The total extra funding Greenwood requested was $14,000.

Parks and Recreation Director Heath Stevens also presented his requests. He said he needs tools to conduct in-house repairs to Kids Kingdom at Friendship Park, swings at J.P. Johnson Park and the department’s lawn mowers and weed eaters. Stevens also requested a man lift so light bulbs around the park could be changed in-house. A used man lift is estimated to cost about $67,000. Public Works Director Eric Morris said that purchase could pay for itself in a a year and a half by avoiding rental fees, or contracting the service to a third party.

Currently the city has two personnel on staff that are certified in the use of the equipment. Renting a man lift last year cost the city about $26,000.

Stevens also has ideas to make the park a revenue generator, including requesting fees from the local PYAA for each registered player, and collecting a percentage from concession stands. Those funds would be used to help maintain the park, Stevens said.

So far he’s been able to establish a $5 per child fee to PYAA, but is working to collect a percentage from the concession sales and collect other fees.

“We’re going to be the bad guys for a while just because it’s new and it’s a change,” Stevens said.

Stevens also requested water fountains be installed at all parks.

After Stevens’ presentation Hinton said the city had to cut out all of his requests because his department’s budget is already over by $83,000, if the additional $90,000 he requested was approved it would put the department over budget by more than $170,000.

Breland said he received an email that the city’s recreational fund has been depleted, and wants to know where the money being made at the park is going.

Stevens said the leagues are keeping the money being made, which is why he wants to establish the fees he proposed.

Morris also presented some requests for the Cemetery Department, which included an additional employee. That request was based on a planned expansion at the Palestine Cemetery and that the city would be responsible for the upkeep of Highland Parkway when it is complete.

“We’re headed for a hard road with maintenance,” Morris said.

Hinton said to hire that one employee would cost the city an additional $31,000 with benefits.

The next step will be for city administrators to form a proposed budget to present to the council. The council has the final say if it will be approved or not.

After the meeting the media polled the mayor and present council members if they were for or against raising taxes.

Picayune may have to cut services or raise taxes…