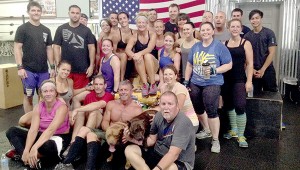 DOG DAY: This group of CrossFit enthusiasts donated hundreds of pounds of dog food to the Pearl River County SPCA, after using the 20 and 40 pound bags as part of their workout.
Submitted photo

Pearl River County’s SPCA was the recipient of hundreds of pounds of dog food as the result of Sunday’s 31 Heroes CrossFit event in Slidell La.

Community Outreach Coordinator Rhonda Furby said every year a number of CrossFit enthusiasts, some from Pearl River County, gather at the Gladiator Academy in Slidell to raise money in honor of the 31 heroes that died in the Aug. 6, 2011 Extortion 17 helicopter crash in Afghanistan. This event is held at CrossFit establishments nationwide in August as part of the 31 Heroes Project.

Usually the participants pay $50 to partake in the fitness event, which is donated to the families of the soldiers who died in the crash. But this year they decided to bring large bags of dog food to donate to Pearl River County’s SPCA to honor the memory of the military working dog that was onboard the helicopter, Furby said.

Pearl River County’s shelter was chosen to receive the donation because of the extensive work they do, especially at the PetSmart in Slidell, Furby said. Participants recalled seeing Pearl River County SPCA representatives at the pet store. They spoke with employees at PetSmart, who had good things to say about the shelter and its staff.

“It really makes a difference because we were out of dog food,” Furby said.

The participants also got a chance to meet a couple of the shelter’s pit bulls, which were received with open arms, Furby said.

“Nobody was intimidated by the pit bulls,” Furby said. “They were just holding their leashes and giving them kisses.”

FILLING UP: Hilton Williams was filling up his truck Friday afternoon. Gas prices have fallen slightly in the past few... read more