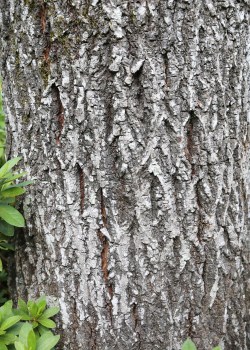 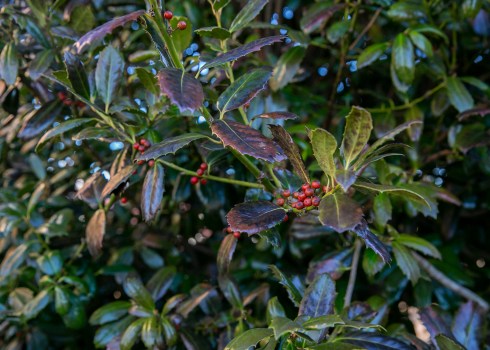 HOLLY -- Although brown leaves show freeze damage, wait to prune until the plant has had the opportunity to put out new growth in the spring. (Photo by MSU Extension Service/Michaela Parker) Alt text -- Green leaves with berries have blackened areas. 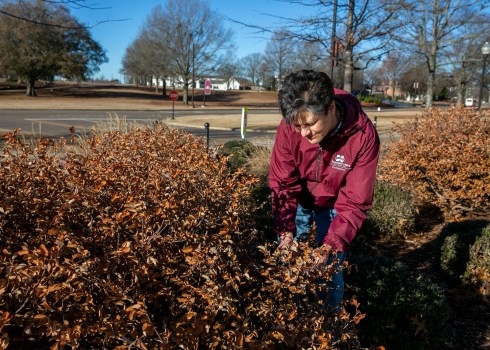 BUSHES -- Clarissa Balbalian, lab manager and diagnostician with the Mississippi State University Extension Service Plant Diagnostic Laboratory examines scorched leaves on woody plants after a freeze. The brown leaves do not necessarily mean that the sapwood has been damaged and the plant is dead. (Photo by MSU Extension Service/Michaela Parker) Alt text -- A woman examines some brown bushes in the landscape.

STARKVILLE, Miss. — Plants across the state that suffered from the unusually cold weather just days before Christmas will need some help recovering from damage they suffered in the deep freeze.

Clarissa Balbalian, lab manager and diagnostician with the MSU Extension Service Plant Diagnostic Laboratory, said the first thing to do when assessing freeze damage to plants is to wait.

“Seeing scorched leaves on woody plants soon after the freeze event does not necessarily mean that the sapwood has been damaged and that branch death has occurred,” Balbalian said. “Dieback in woody plants will become evident over a period of months, and the full extent of injury may not be apparent until well into summer.”

That means gardeners should avoid pruning or removing plants until they have had the opportunity to push out new growth.

“Because of the hard freeze, new growth may be somewhat delayed,” she said. “Pruning now will likely damage some healthy tissue the plants need to heal, and secondary infections may occur. Wait until it is clear what tissue has died and until further freezes are not expected.”

Alan Henn, Extension plant pathologist, said this freeze was unusual in that the temperature fell about 50 degrees in a matter of a few hours.

“Warm temperatures in areas encouraged some plants to break dormancy and even bloom,” Henn said. “The buds in the process of breaking dormancy were killed. In the spring, these branches may have multiple sprouts. If allowed to survive, some of the sprouts will form weak new branches.”

Gardeners can remove some of the sprouts in the spring to shape the plant.

“In general, remove sprouts growing into the plant and others that produce branches that will eventually grow to cross each other,” Henn said.

In addition to existing freeze damage, these plants will be susceptible to more damage from future alternating periods of warm and cold weather.

“Leaving the dead foliage on these plants will provide some protection against direct cold and sunburn,” Henn said.

Plants store food in the woody tissues, and many plants lost significant amounts of this tissue in the freeze. Perennials also lost many leaves, and plants must use stored food to replace the freeze-burned leaves, which will eventually fall off.

Henn advised leaving the fallen leaves for now, as they may provide some insulation to the roots from future cold spells, and their decay will release their stored nutrients back into the soil where they are accessible to the plant roots.

When it is safe to prune, start at a branch tip and use a sharp blade to lightly skin the bark to reveal the wood beneath. Observe the color under the skinned area. Damaged wood is brown.

“Work your way down until the skinned area becomes green, which indicates healthy tissue,” Henn said. “Prune off the tissue above the green area, being sure to make cuts at about a 30 degree angle to prevent water from accumulating on the cut surface.”

Bulbs that were still dormant should be safe from the freeze, but those that had emerged or were starting to emerge were likely damaged. The earliest bulbs, such as paperwhite and narcissus, are the most likely to be hurt.

Henn said a hard freeze can split the trunks of both small and large trees as the water inside the plant freezes, expanding and rupturing the cells. This can have multiple impacts.

“The water-conducting tissues can be damaged,” he said. “If the damage is severe, the water the plant depends on to thrive will not be able to reach everywhere, and leaf, twig and branch die-back can happen.”

If the trunk is only partially injured, the food channels are disturbed, and the affected area will function poorly.

“The plant may wilt above the damaged area in the heat of summer when the plant needs all the water it can get to cool itself,” Henn said.

The December freeze may have been deep or long enough to cause longitudinal bark split – what is known as “frost crack” — in trees across the state. Henn said there is not a clear explanation for why these splits happen, but the problem is more severe in trunks exposed to full sun.

Sunscald happens when the tissue below the bark freezes and the sun heats the bark.

“The bark remains whole, but a sunken area will appear centered around the affected area,” Henn said. “In the spring, the bark starts to dry out and may open up on one or more sides.”