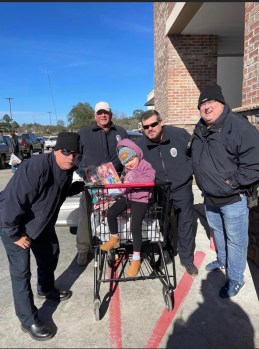 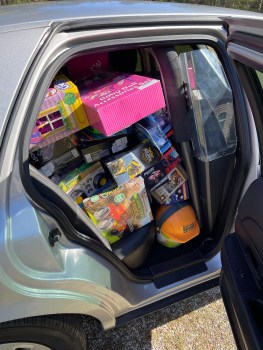 A police truck filled with toys. 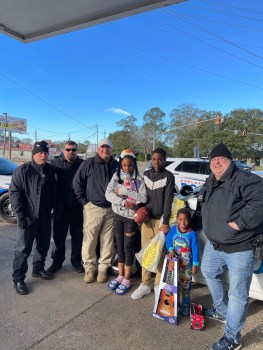 City of Poplarville Officers hand out toys to three children. 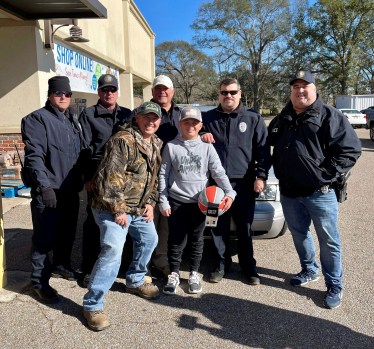 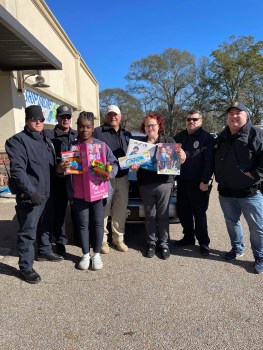 Poplarville Warrant Officer Bert Martin and other law enforcement gave away nearly $12,000 worth of toys to families in Poplarville, MS.

With help from the Coordinator for Toys for Tots, Theresa Milar, and donations from citizens of Poplarville made this event possible. Martins said they also received donations from out-of-state families through social media, who mainly purchased toys from amazon to be shipped to Poplarville. Altogether Martin estimated $10,000 – $12,000 worth of toys.

Two truckloads and two loaded trunks of police cars carried all the toys. By the end of the day, those cars where empty, and all the types were distributed to families and children.

On their toy giveaway, Martin said they delivered to five in-need families including a total of 14 children. Former Poplarville Police Chief Daniel Collier along with his officers helped donate the toys to the families.

“We’d like to personally thank the people that helped donate toys,” said Martin.

With still toys left over Martin and his team traveled the city and simply gave away the remaining toys.

“If we’d seen a car with kids in it we’d pull the car over and donate toys, and let them pick out what they wanted,” said Martin.

Martin said the families were in “awe”. According to Martin, several of the families took this as a blessing, without it, some of the children would have gone gift less for Christmas. That was Martin’s intention, to give back to me the less fortunate.

“A lot of them said it was a blessing because they didn’t have, much to give to their for Christmas… it’s a sad story but you could see the smile on the kid’s faces when we pulled them over… it was a sight to see but the kids [and parents] enjoyed all of it,” said Martin.

Martin’s done a toy given away before. He did one in December of 2017 which was also a good turnout. He started doing this because he wanted to give back to the community and the the kids of Poplarville.

He also added that this kind of community project builds a good reputation among the children and law enforcement of Poplarville.