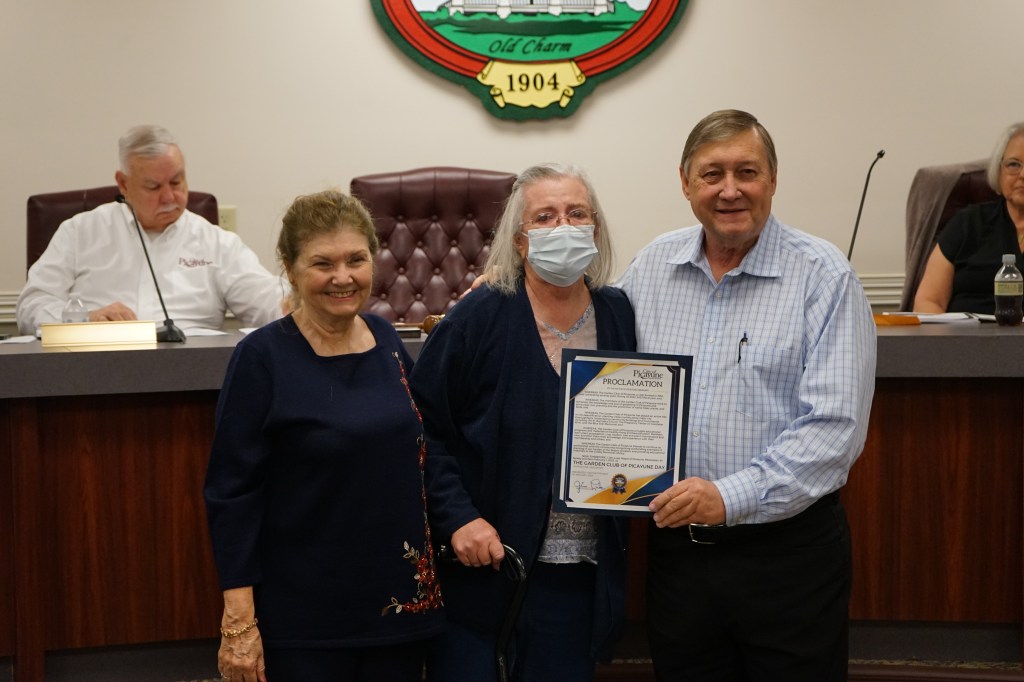 The introduction to the Picayune City Councils’ meeting began with recognizing the proclamation of the Garden Club of Picayune. The Garden Club of Picayune was formed in 1952, the member of the club work to stimulate the knowledge and love for gardening in the city of Picayune. They encourage civic planting and protection of nature trees plants and birds. They have played an active role in city beautification. They also provide educational programs and materials on healthy living and beautification.

The Public Works department led by Manager Eric Morris has completed drainage planning in several locations and installed a gas meter for Americlean. They also repaired a water main break near Walmart. It’s been reported that a car hit a fire hydrant causing the break. Morris said by the end of this week they would complete brickwork around the oak trees at Good Year BLVD. Upcoming tasks for the department are to repair termite damage caused at the Crosby Commons Park maintenance building. The Board later approved for Morris to enter into a contract with Stark Exterminators for termite treatment.

The Police Department led by Chief Joe Quave said since their last regular meeting they received 756 calls and 35 arrests. Twenty-seven of these arrests were misdemeanors.

The Police Department led by Chief Pat Weaver said they have responded to 44 calls 10 motor vehicle accidents, and four fires and installed 10 smoke detectors in the City.

The Picayune Rotary Club led by President Nickie Smith said the program is having its Mardi Gras Parade for the resident of Bridgeway on Tuesday, February 14, welcome to the public. On April 14 they will host a donation golf tournament on Monday, April 17, which will help fund the Picayune Rotary Club’s events. The Item will provide more detail on the tournament in an upcoming report. The Rotary Club is also starting a scholarship program for junior-grade girls in Picayune. Details on the scholarship and how to apply will be in an upcoming report. Inquiries can also visit Smith at Southern Marketing and Printing.

Main Street of Picayune led by Director Reba Beebe, said their several upcoming events along with $125,000 in grants confirmed for 2023. On Saturday, March 18th the Egg Drop at the Municipal Airport will be back since its absence in 2012. This event includes dropping 10,00 eggs from airplanes, helicopters, and a hot air balloon. The $125,000 will go towards reviving downtown Picayune. Main Street of Picayune plans to apply for an additional $68,000 in grants.

In other business, Mayor Luke informed the city of upcoming signs at Exit 4 and 6, welcoming citizens into the city of Picayune. The Leola Park restroom is near completion, all it needs is a paint job. The Board approved the resolution to enter a lease with Southern Mississippi Investment Company, Inc for the construction of a police station and related facility and improvements in the city of Picayune.

In the next meeting on Tuesday, Feb. 7 at 5 p.m. a representative of Rouses which is under construction in Picayune will be at the Board to give a status update.