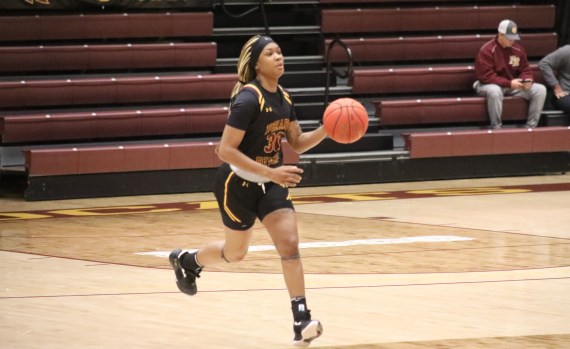 DECATUR, Miss. — The Pearl River women’s basketball team opened up conference play in a big way Tuesday night, hitting the road to defeat East Central by an incredible 64-15 score. The defensive effort was the best under the direction of head coach Scotty Fletcher.

“I thought the girls played well defensively,” Fletcher said. “Anytime you go on the road it’s going to be tough to shoot the ball well, so we really had to rely on our defense.

“Coach Harris does a great job and will have East Central at a championship level in no time. She was a phenomenal player and I believe she will have them where they need to be.”

The Wildcats continued the impressive defensive play in the second quarter, only allowing the Warriors to score two points. Pearl River piled it on offensively adding to its lead as the first half ended, leading 31-6.

Pearl River opened the scoring in the third through a Keshunti Nichols (Pearl) layup. The Wildcats continued to add on and opened things up 43-9.

Hama’ya Fielder (Philadelphia; Neshoba Central) drained a 3-pointer to extend the lead to 46-9. Tierra Simon ended the quarter with massive back-to-back blocks and the Wildcats lead 48-9.

Pearl River opened the final quarter of play on an 8-3 run that extended the lead to 58-11.

From there the teams traded scores with the Wildcats holding a large 62-15 advantage.

Pearl River added one more bucket toward the end of the game to close out the conference opener with an impressive 64-15 victory.

Fielder led the way for the Wildcats with 13 points. She also added four rebounds and three assists.

Tierra Simon (Houston, Tx; Heights) added eight points of her own and lead the team with 11 rebounds.

“I thought Tierra was really good,” Fletcher said. “She played very calmly and had her best game as a Wildcat.”

The Wildcats return home Monday against Hinds. Tipoff inside Marvin R. White is set for 6 p.m.

All home Pearl River Basketball games are livestreamed for free at PRCCMedia.com/gold. Fans who have Roku, Amazon Fire or Apple TV devices can also watch the Wildcat broadcasts by downloading the “Pearl River CC” channel from their app stores.