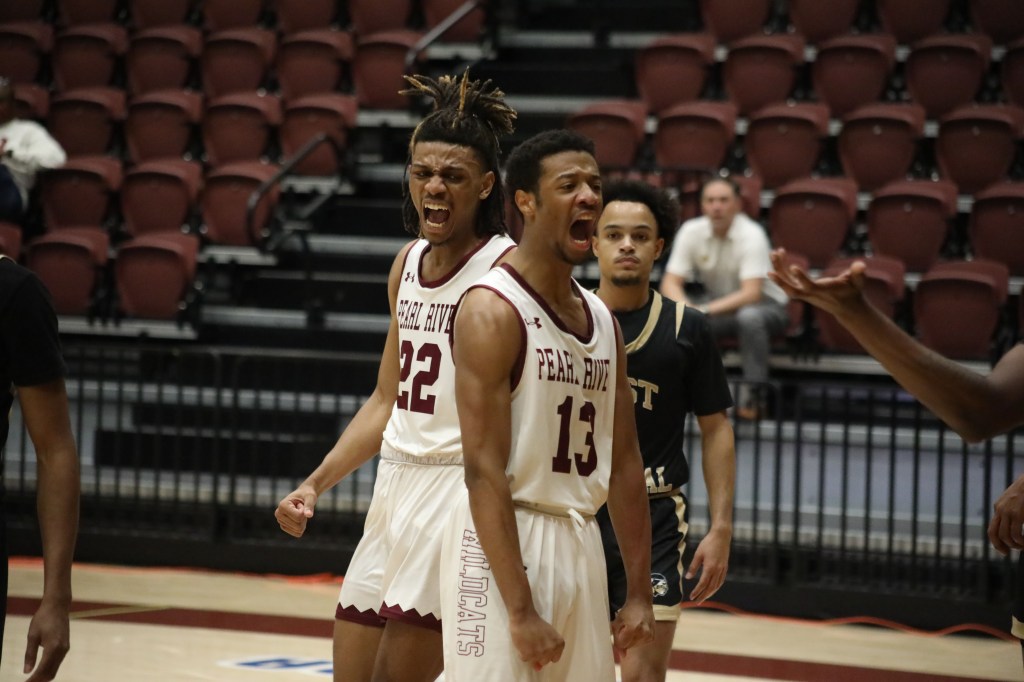 Dylan Brumfield celebrates after getting a contact layup to fall in PRCC's 91-75 victory over East Central. (Photo by Trenton Gascho)

POPLARVILLE, Miss. — The No. 23 Pearl River men’s basketball team showed some rust in the early stages of Thursday night’s conference opener against East Central but turned it up a notch down the stretch to come away with a big 91-75 victory. The victory marks PRCC’s 13th consecutive victory in conference openers.

“We just need to continue to stick to the keys, make minor adjustments and not get out of character,” head coach Chris Oney said. “If we do that, we can give ourselves a chance to win every basketball game. Early tonight, they were hitting shots that we wanted them to take. Finally, we were able to stretch out the lead a couple of times and take control of the game.

“We didn’t panic tonight. We just stayed in there and battled. We had guys step up, make plays and hold down the fort.”

Entering the game, East Central’s Tai’Reion Joseph was leading in the NJCAA in points per game with a mark of 27.5, but the PRCC defense held him to a season-low nine points.

The Wildcats battled back from the deficit with a 9-2 run to tie up the game 10-10. The run started with a steal and coast-to-coast layup by Jermahri Hill (Bessemer, Ala.; Berkmar). On the next offensive possession, Cam Brown (Hattiesburg) dished inside to Preston Turner (Laurel; West Jones) who laid it off the glass and in. Turner followed it up with a perfect trip to the free-throw line. PRCC finally tied the game when Carlous Williams (Hattiesburg; Harrison Central) caught a pass at the top of the key and promptly knocked down a 3-pointer.

PRCC took its first lead of the game with 14:06 remaining in the contest when Brown ran inside and got a contact layup to fall to make the score 12-10.

The Wildcat advantage increased by as much as six points at 17-11, but East Central roared back to take a 20-17 lead with nearly 10 minutes left in the half. Dylan Brumfield (Oak Grove) helped Pearl River tie things back up at 20-20 after converting an old-fashioned 3-pointer.

The two teams found themselves all squared up at 26-26 soon after, but Hill plucked away a ball from the East Central guard and rushed down the court for an easy layup. The next offensive play saw Ty Moore (Grenada) catch an inside pass from Williams and promptly lay it off the glass and into the basket. The basket made the score 32-26.

ECCC cut things to just a two-point deficit before the first half ended as PRCC carried a 41-39 advantage into the break.

PRCC stretched its advantage out to 46-41 to begin the second half of the play as Hill euro-stepped around the East Central defenders and got his layup to fall. The lead grew to 50-43 just a few minutes later with another Brumfield layup. He caught the pass with his back to the basket, backed into the paint and got the contact layup to fall. He then converted the free throw to finish up the 3-point play.

Another dish inside to Moore resulted in an easy layup with 13 minutes left in the quarter. The basket made it a 57-52 contest.

The Wildcats began piling it on after that, going up by as much as 14 points at one point in the half with a 72-58.

PRCC began a 3-point barrage down the final stretch of the game, using a Brown basket and back-to-back threes from D.J. Harried (Natchez; Warren Central). PRCC ended up claiming a big 91-75 victory over the Warriors.

Brumfield turned in an incredible effort on the night, finishing with a 22-point and 10-rebound double-double. He also chipped in five assists.

Hill was second on the team in scoring with 16 points.

In addition to his stellar defense, Brown chipped in 14 points, five rebounds and four assists.

“Cam has been in a ton of these wars over his three years, so he knew what to expect,” Oney said. “Cam sacrifice his body for the team and guarded their best player. I’m happy for him, but that’s what I expect from him.”

Williams also scored 14 points. Moore turned in his best scoring effort of the season with 13 points.

Williams and Moore each added eight rebounds in the game.

Pearl River returns to action Tuesday as they travel to Hinds for a 6 p.m. tipoff. The game will be livestreamed at HindsCCSports.net.