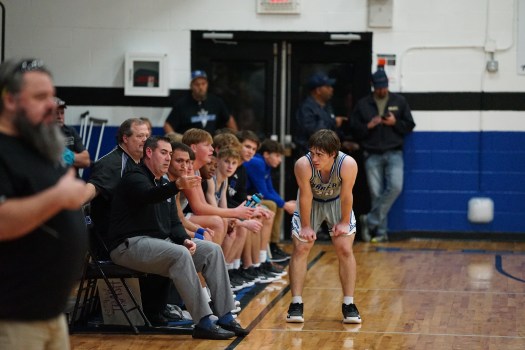 Pearl River Central, Picayune, and Poplarville varsity basketball will enter their respective district schedules this week. Here, we will recap each team’s season thus far, and hear from several coaches about their teams and upcoming matchups.

The Blue Devils are 1-2 in their last three games. They lost to Stone in overtime by one point (62-61), beat Poplarville the next day (66-26) then lost to a Louisiana team, the Fontainebleau Bulldogs in overtime by 5 points (67-61).

When asked about the sum of those three games, Head Coach Scott Stephens said,

“When you miss 12 free throws and you turnover the ball over 26 times, you’re not beating anybody. A lot of the issues we’re running into are self-inflicted, it’s things that we control that we’re just not [controlling] at the moment.”

Things PRC have been controlling are rebounds, 17/18 games PRC has won the rebounding battle over their opponents. But a recent example of self-inflicted moments was allowing a late offensive rebound off a free through against Fontainebleau. That eventually led to Fontainebleau taking a bigger lead late in the game. These mishaps are rare to see from PRC. With that being said Stephen is chalking that up as a brief mental mistake.

“The timing was awful but it’s not something we see consistently,” said Stephens.

Where PRC is struggling is converting free throws and handling defensive pressure. They practiced a lot on breaking a trap during Wednesday’s practice.

This season there are three keys PRC tries to abide by.

75 percent or better from the line

Stephens said keys 1 and 2 are where they are getting beat.

“Of the three keys, we are only getting one in. To win you need all three,” he said.

During district play, if PRC maintains there a solid defensive presence and continues to win the rebounding battle, then it would be enough for wins. Stephens said it would hopefully put them in a good position to make a run within the district and the playoffs.

PRC’s junior Donnie Ladner gets high praise from Stephens, he’s a very capable guard who’s aggressive off the dribble, finishes through contact, and stretches out to shoot as well. There is no ceiling for Ladner but where Stephens gets frustrated on occasion is when Ladner falls short of his capability.

“I think sometimes I believe he can do things that he thinks he can’t do. We’re working on that and he’s smart enough to figure it out. He’s going to be fine, he wants this,” said Stephens.

Just like Ladner, Stephens said senior guard Payton Cardona, isn’t playing extremely well at the moment but he’s more than capable and has proven so in previous games. Stephens also wants his big man and senior Kyle Penton to be a little more productive and physical. At the same time, “He’s come along and he’s trending into the right direction… he’s getting a little better every game” Stephens said.

Sophomore forward Konnor Cazenave is the energy guy for PRC. He does a little bit of everything, defends, rebounds, scores around the rim, and hits corner or top-of-the-key threes. He sits with the highest shooting percentage behind the arc for PRC.

“He’s our workhorse,” said Stephens. “They [his starting 5] are all capable, and I feel like they can do anything.

Said Stephens, PRC isn’t playing their best batch of basketball right now, and the upside to that is their overdue to start making a run. After Christmas break and transitioning into playoffs is the time teams want to play their best games.

Stephens said they haven’t peaked at all yet, so the positive in his mind is that their peak is coming at some point.

Come Friday, Jan, 6 at 6 p.m. they will be on the road to play Picayune, after that they will play West Harrison on Jan. 13 and Long Beach on Jan. 17.

Against Moss Point, the Lady Maroon Tide led at the half, 16-15. But Moss Point outscored the Lady Tide 16-5 in the third quarter, eventually clinching their win over Picayune.

Head Coach Shayla Goss in the fourth quarter that they had beaten themselves at that point.

The Lady Maroon Tide has an ongoing turnover issue but it looked to lighten up the past few games. The main issue is the lack of shots players are taking.

“We have a lot of shooters on the team but are taking a lot of shots,” said Goss. “We’re definitely putting numbers up on the board we just got to be shooting more. We got to take more shots that the only way we can we these games is if we take more shots.”

Goss said the root of the lack of shooting is intimidation. Plays are being run perfectly, but Goss thinks her players are lacking confidence in their ability to shoot.

“I tell them every day, ‘I need you to understand and be confident in the fact that you are a shooter because we have a team full of shooters, he doesn’t see them a whole lot because we’re not taking the shots.”

Goss has full confidence in their ability to score because they’ve proven so. Senior Oriana Polk has answered the bell recently when it comes to scoring. In her last outing, she scored 16 points and wasn’t afraid to shoot. Junior Jamara Wilson is another who’s come along and is taking more shots. Wilson plays on the post and has good passing skills. Goss is building her confidence knowing she can spread her game out more.

Along with her other plays, Goss is looking for five players to play consistently. Once Goss can get her girls to be confident and consistent, “then the game changes for us,” she said.

Come Friday, Jan. 6 the Lady Maroon Tide hopes to start district play with a whole lot of confidence. They host PRC at 6 p.m. their next game will be at West Harrison on Jan 10 then at Long Beach on Jan 13.

Picayune in their last three games is 1-2. They dropped two games, Harrison Central and Moss Point. They bounced back with a 70-61 win over Madison Central on Dec, 30.

With the District approaching, Head Coach Eric Vianney hopes to end the team’s struggles by finding an emerging leader. Eight of Picayune’s 12 losses were by single digests In Vianney’s words Picayune has been inconsistent and not disciplined this season.

Vianney is in good spirits that they ended their non-district schedule with a win and he hopes it can carry over to district play. He also hopes a leader will emerge.

“Hopefully we grew some and hopefully we start moving in the right direction,” he said.

Vianney says he has players with the potential to be leaders mainly his five seniors (Damarius Magee, Tyran Warren, Troy Carter, Jaheim Everett, and Joshua Holmes) but right now, none have yet risen to the occasion.

As observed from their previous game, when Picayune is focused, and engaged, they are a dangerous team.

“When they’re competing in every possession, rebound the ball flying around, playing for each other, making shots… but when you don’t have those things happening, winning is hard,” he said.

With district play here, Picayune plans to take things one game at a time. Defense comes first. Picayune will continue to pressure teams and have a huge focus on getting defensive stops. A leader in that category is Everett; Vianney tags him as the team’s best on-ball defender and maybe the best in the state. He challenges Everett to bring that defensive energy every night.

Offensively they want to control the ball as much as possible, and players must be consistent at a high level in their roles for Picayune to outscore their opponents.

Upcoming, Picayune will play PRC this Friday at 7 p.m.

Next, they will travel to play Purvis on Jan 6 at 6 p.m., then host Forrest County Agricultural on Jan. 10 then host Columbia on Jan. 13.

Head Coach Dean Seal and his Hornets are still looking for their first win of the season. The upcoming schedule is the same as the girl, tip-off will be at 7:30 for each game.