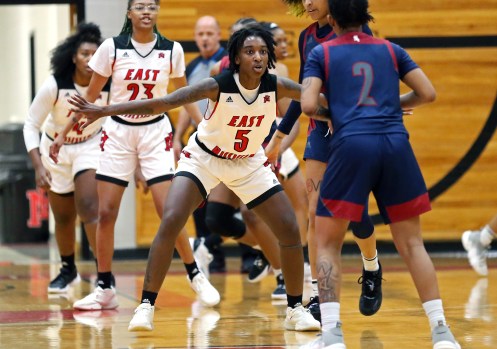 SCOOBA/WESSON – East Mississippi Community College’s basketball teams split with Copiah-Lincoln during Thursday’s MACCC action played on the teams’ respective campuses. The EMCC Lions had four starters score in double figures to claim a 71-62 home win over the Wolves, while the visiting Lady Lions fell, 74-62, at Co-Lin.

In men’s action contested at Keyes T. Currie Coliseum in Scooba, the EMCC men used a 12-2 run to turn an early five-point deficit into a five-point lead (14-9). The Lions maintained the lead for the remainder of the opening half and still held their five-point advantage (25-20) heading into halftime.

Following intermission, the Wolves trimmed the deficit to two points on three occasions early in the second half before taking their first lead (39-38) since the game’s opening minutes on AJ Warnsley’s three-pointer at the 13:21 mark.

EMCC responded by scoring nine unanswered points over the next two minutes to move ahead for good with 11 minutes remaining in the contest. Tremaine Dixon Jr.’s floater sparked the 9-0 run and Jacob Reese’s put-back basket extended the lead to 47-39 following Ashten Michael’s back-to-back scores.

That was as close as the visitors would get, however, as the Lions went on a 10-2 spurt to give them a double-digit lead. Dixon’s consecutive three-point bombs followed Andrew Mason’s triple to put the home team on top, 61-51, with 4:13 left in the game.

After EMCC increased the margin to 13 points (67-54) with a pair of Kevin Henry free throws a minute later, the Wolves would not get any closer than eight points (68-60) the remainder of the contest.

Dixon paced the Lions’ quartet of double-digit scorers with 16 points on 4-of-6 accuracy from three-point range to tie his season high. Henry followed with a career-best 15 points, while Blake Butler and Mason added 13 and 10 points, respectively, to the winning effort.

Co-Lin’s Dylan Canoville led all game scorers with 19 points, followed by Warnsley and Hersey with 14 and 13 points, respectively.

In the women’s contest played at Mullen Gym in Wesson, the Lady Lions owned a 17-14 lead following a pair of ties and four lead changes through the opening 10 minutes of play. The visitors then stretched the lead to eight points (22-14) by opening the second quarter with a three-pointer by Sadie Williams and a Kennedi Jimison bucket.

Despite EMCC knotting the score at 40-40 midway through the third quarter on Nakeria Scales’ three-point play, the Lady Wolves doubled their three-point halftime lead to 50-44 heading into the final 10 minutes of action.

The Lady Lions opened the fourth quarter by scoring the first five points on baskets by Gabby Collier and Zaniyah Brown to trim the deficit to a single point (50-49). Co-Lin responded by going on an 8-0 run to extend the lead to nine points midway through the quarter.

The visitors did manage to narrow the margin to four points (62-58) by the 1:36 mark on a Williams bucket, but the Lady Wolves were able to seal the 12-point victory at the charity stripe by hitting all 10 free throws down the stretch.

Co-Lin’s Ceara Myers topped all game scorers with 21 points on 7-of-10 field goals and 7-of-7 free throws. Zykeria Anderson was right behind with 19 points, including 13-of-17 shooting from the free throw line.

East Mississippi’s basketball teams will resume MACCC competition on Thursday (Jan. 19) with contests against Holmes. Head coach Isaiah Butler’s EMCC Lady Lions (3-7, 1-2 MACCC) will play host to the Holmes women at Currie Coliseum in Scooba, while head coach Billy Begley’s Lions (11-2, 2-1 MACCC) will travel to Goodman to take on the Bulldogs. Both contests are scheduled for 6 p.m. tip-offs.