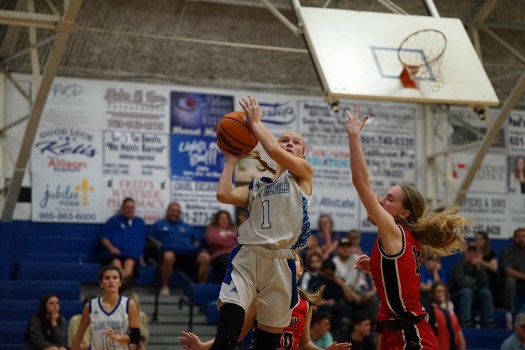 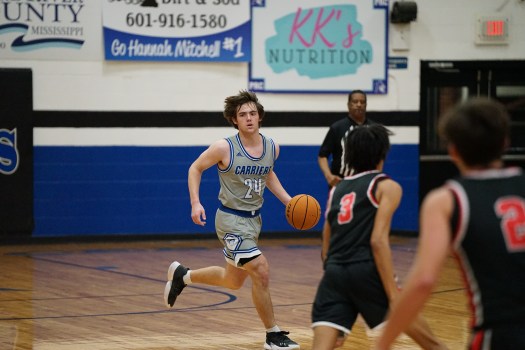 The Lady Blue Devils, lost 38-34, and the Blue Devil boys’ lost in their third overtime game this season, 67-61. Previous overtime losses were to St Patrick and Stone.

The Lady Bulldogs’ lead grew to 17-11 after several back-and-forth scoring. Emily Carroll knocked down a three to shrink their deficit to 19-14. Hannah Mitchell was then fouled and she hit two free throws. At the end of the half, Lady Bulldogs led 19-16.

English cut their deficit to 19-18 after a dribble spin move off her defender. The Lady Bulldogs hit a corner three, and a layup to lead 25-18. Carroll hit a jumper that ended the quarter score at 25-20.

Down by five PRC tried its best to take a lead. Several times they got within one point.

After an English and-one layup, PRC trialed 35-30 with two minutes remaining. English was fouled at the three-point line, she converted 2.3 free throws putting PRC behind 35-32 with 1:35 reaming. The Lady Bulldogs kept the Lady Blue Devils at bay for the remainder of the night, winning 38-34.

To start the game, the Bulldogs’ 2-3 zone defense PRC, but didn’t affect them at all. PRC went on an 8-0 opening run. Kyle Penton and Payton Cardona started the game with a pair of threes. PRC led would grow to 18-7 at the end of the quarter.

PRC would maintain its lead through the second quarter. The Bulldogs got out of their zone defense and saw more light n offense. Yet PRC still managed to score when needed. They ended the half, 30-22.

During the fourth, PRC ran into speed bumps, The Bulldogs were hitting shots and their full-court pressure made offense difficult for PRC. The game had its first tie at 49-49. From there Donnie Ladner finally broke the press and scored coast to coast. That momentum grew PRC lead to 55-49 with two minutes remaining. The Bulldogs responded with a 7-0 point run and a one-point lead with under a minute to play. Cardona went to the strike with 22 seconds left and converted ½ free throws to tie, 56-56.

Bulldogs missed a three at the buzzer forcing the game into overtime.

In extra time, it was a back-and-forth scoring contest. The Bulldogs took a 59-58 lead after Kinzeler’s jumper. From there the Bulldogs scored five unanswered points. With under 2 minutes remaining the Bulldogs led 58-64. The Bulldogs did enough to hold off PRC to win 67-61.

Bulldogs Mathew Kinzeler had a game-high 24 pts. PRC’s Ladner lead with a team-high, 20 pts, and Cardona finished with 15.

Next, PRC will travel to Picayune this Friday, Jan 6 for the season’s first district matchup.