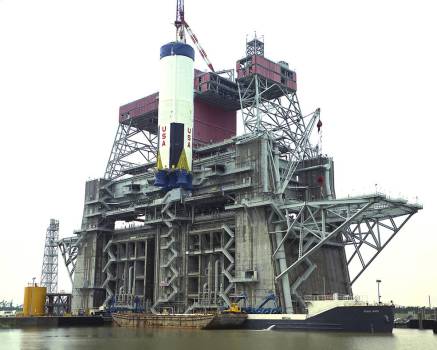 A derrick crane lifts the Saturn V S-IC-12 onto the B-2 Test Stand at NASA’s Stennis Space Center on July 18, 1969, in preparation for hot fire testing and use on the final Apollo 17 mission to the Moon. Credits: NASA 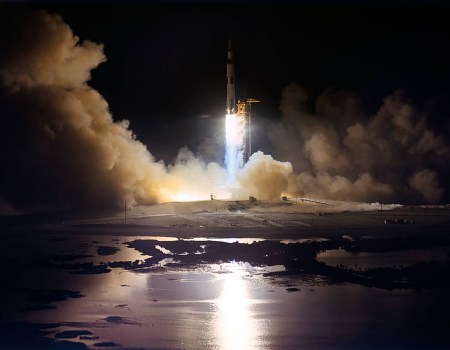 Apollo 17 launches from Pad A, Launch Complex 39 at Kennedy Space Center, Florida, on Dec. 7, 1972, at 12:33 a.m. (ET). The mission was powered by Saturn V stages tested at NASA’s Stennis Space Center in south Mississippi. The Apollo 17 mission represented the only night launch of the Apollo Program. Credits: NASA

NASA’s launch of Apollo 17 to the Moon 50 years ago, early on the East Coast morning of Dec. 7, 1972, marked the final flight of the ambitious space program that sent the first humans to the lunar surface about three years earlier.

It also helped close the opening chapter in the storied history of Stennis Space Center, the nation’s largest propulsion test site that continues to test systems and engines to help NASA explore the universe for the benefit of all.

As it had for each of the previous eight Apollo missions, Stennis teams tested both the first and second Saturn V stages that launched the Apollo 17 astronauts – Commander Eugene Cernan, command module pilot Ron Evans, and lunar module pilot Harrison Schmitt – in 1972.

The mission was notable as the only night launch of the Apollo Program. It also established several lunar records, including the longest human landing mission, the only scientist to walk on the Moon (Schmitt), the longest period of surface extravehicular activity, and the largest sample return.

If that is not impressive enough, it also captured the iconic Blue Marble image of Earth – considered to be one of the most widely distributed photos in history.

Stennis played a key role in making the history and milestones possible, testing the Saturn S-IC-12 first stage on Nov. 3, 1969, and the Saturn V S-II-12 second stage on March 4, 1970. As with the actual lunar mission, testing the stages also provided noteworthy moments.

This was particularly true for the Saturn V first stage, installed on the B-2 Test Stand at Stennis on July 18, 1969. One month later, on Aug. 17, 1969, as teams prepared for stage testing, Hurricane Camille arrived on the Mississippi Gulf Coast as well.

It was one of the most powerful storms ever to hit the United States. Winds reached upwards of 200 miles per hour, and the storm produced about a 24-foot storm surge, wrecking the coastal area.

NASA and Stennis responded with a wide range of leaders and employees coming together as a driving force for hurricane relief and recovery. Diverse test complex teams at Stennis responded in like fashion, moving forward with critical propulsion test work.

By mid-October, testing of the S-IC-12 stage was resuming, even as another storm initially threatened the region. Instead, Hurricane Laurie dissipated to a tropical depression before making landfall in northern Mexico.

Stennis teams completed a hot fire test of the Saturn V S-IC-12 stage in early November. The stage, with its five F-1 engines producing a combined 7.5 million pounds of thrust, fired for 125 seconds, just as during an actual launch.

Following that effort, attention turned to testing the Saturn S-II-12 stage, installed on the A-2 Test Stand on Dec. 22, 1969. Test preparations extended into the new year.

Four attempts at hot fire were aborted due to various issues. However, the fifth attempt in early March 1970 was successful, with the stage’s five J-2 engines firing to produce more than 1.1 million pounds of combined thrust for 376 seconds.

The stage was removed from the A-2 stand on March 18, then re-installed on the sister A-1 Test Stand at Stennis in mid-July to perform checkout tests on some needed modifications. The checkouts were completed in subsequent weeks.

Saturn V S-II-12 was removed from the A-1 stand on Oct. 15, 1970, then shipped to Kennedy Space Center for launch preparations.

By the time the sun rose on Dec. 7, both stages had fired as needed. Apollo 17 was on its way to the Moon – and into history.