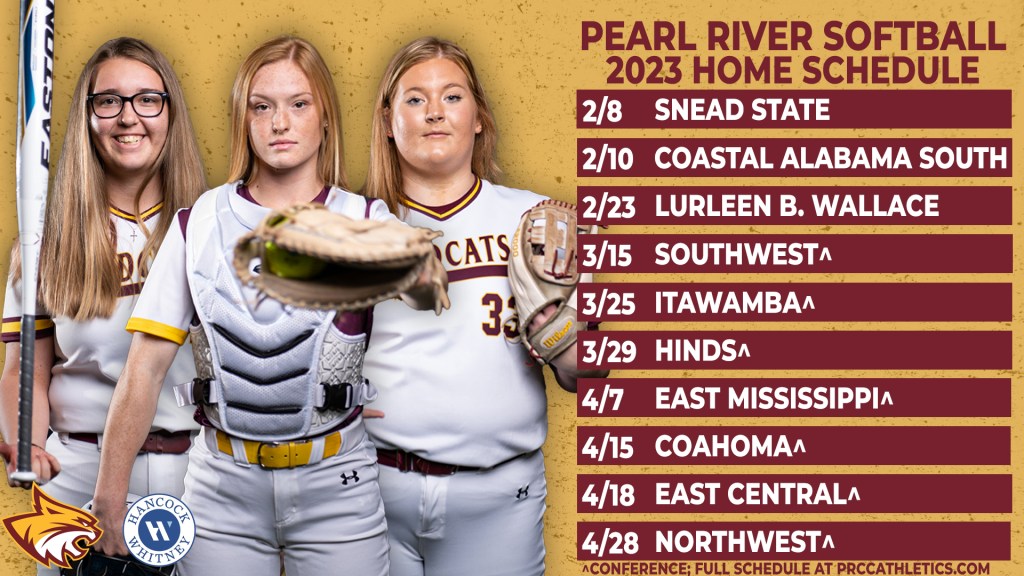 POPLARVILLE, Miss. — The Pearl River softball team will be road warriors early during the 2023 season. The Wildcats look to build on the success of the 2022 season that saw PRCC eclipse the 30-win mark with a final overall record of 31-7. The Wildcats will participate in the prestigious NFCA Leadoff Classic in Columbus, Ga. in early March.

The Wildcats open their 2023 campaign Jan. 27 and 28 at the Galveston Texas Tournament at Alvin Community College. PRCC travels to Youngsville, La. to compete in the Bullets Tournament on Feb. 3.

Pearl River hosts Snead State Feb. 8 and Coastal Alabama – South on Feb. 10. Following the homestand, the Wildcats travel to LSU-Eunice to play Lamar State College – Port Arthur on Feb. 15, followed with the Sun Chief Classic in Gulf Shores, Ala. Pearl River returns home to face Lurleen B. Wallace on Feb. 23 and closes out February at Pensacola State on Feb. 28.

To close out the non-conference schedule, the Wildcats open March in Columbus, Ga. in the NFCA Leadoff Classic. PRCC will face Indian River State College and San Jacinto College – South on March 3 and Parkland College, Lansing and North Dakota State College of Science on March 4.

The Wildcats open April on the road against Holmes on April 1 and Copiah-Lincoln on April 4. PRCC returns to the friendly confines of Wildcat Stadium to face East Mississippi on April 7 before traveling to play rival Mississippi Gulf Coast on April 12. Pearl River will host back-to-back home stands against Coahoma on April 15 and East Central on April 18. The Wildcats travel to rival Jones on April 25 and return home to host Northwest on April 28 to close out the regular season.

The PRCC softball program is coming off one of its best seasons in recent memory. The Wildcats compiled a 31-7 overall and 20-8 MACCC record. Pearl River finished the season ranked ninth in the final NJCAA regular season poll. PRCC will look to 2022 NJCAA Second Team All-American selection Brinson Anne Rogers (Statesboro, Ga.) and 2022 All-MACCC Second Team selection catcher Dallyn Nance (Nanih Waiya) as they look to improve the foundation PRCC head coach Christie Meeks has built in her first three seasons at the River.

Pearl River Community College’s Athletics Department is cashless for ticketing during the 2022-23 academic year. Fans can purchase either single-game or season-tickets for the 2023 Wildcat softball season. Tickets can be purchased online at PRCCAthletics.com/Tickets or fans can download the HomeTown Ticketing app to their mobile device to purchase and store their tickets.

The Wildcats will livestream all matches for free at PRCCMedia.com/gold. Fans who have Roku, Amazon Fire or Apple TV devices can also watch the Wildcat broadcasts by downloading the “Pearl River CC” channel from their app stores.

Games can also be heard at WRJWRadio.com.