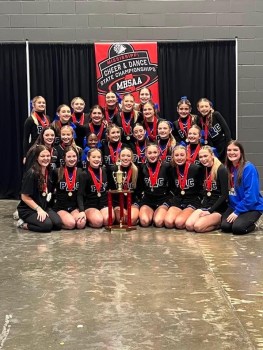 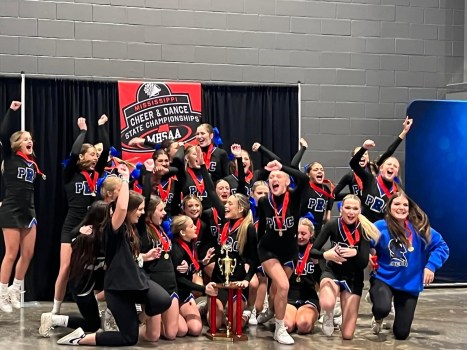 By the end of February, high school cheer and dance in Picayune, Poplarville, and Carriere, Mississippi may be on everyone’s maps. At least that’s what senior and Blue Devils cheer captain, Callie Hebert and head coach Liz Smith wants.

Before we reach that date, flowers must be given to the Pearl River Central Cheer team. On Dec. 3, PRCHS took 1st place at Magnolia Regional Competition, earning them a bid to Nationals. Five days later they won the 2023 5A Cheer and Dance Champions, placing first in the Varsity Game Day division. Picayune cheer finished second in that same division.

Winning a state championship was one of the top three moments of Hebert’s life. Co-Captain and junior PRCHS cheerleader Amber Stromeyer said after last year’s state appearance it proved to the team that they could win it all.

“That had a lot to do with our mindset this year. And it feels amazing, unreal honestly to actually make history, that’s crazy.”

Just like every other sport in the U.S, the COVID Pandemic blinded side Stromeyer’s and Hebert’s freshmen and sophomore season. Once they finally were able to compete in 2021, PRC cheer sprung into action.

“From everything they’ve been through since their freshmen year, they wanted it (a state championship) so much. It affected the whole team, even my current freshmen that have never been to Nationals wanted it just as much. It comes from incredible leadership from my seniors and some of my juniors.”

She added, “We didn’t have to beg them hard they wanted it from day one.”

Hebert said that mentality from fellow seniors spread like wildfire.

PRC cheer is a humbling group of athletes, they stay grounded, never go in cocky, bring their all, and accept what they’ve earned. Just this season they’ve earned a lot and written history at PRCHS. In February of 2022 PRC advanced in the National competition for the first time in school history, won their first regional competition in school history in December and brought back the school’s first state championship.

Assistant Head Coach Kaitlyn Orgeron, has coached at PRC for nearly four years. She also cheered at PRCHS and graduated in 2017. The last time PRC was close to winning state was during her senior year, when they lost by less than one point. So for Orgeron to come back to the program she once cheered for and now lead a team to finish the script is, “that much sweeter,’ she said.

She wasn’t the only alum that is actively supporting. Smith also cheered at PRC in 2011, but she said even people she coached, and people who cheered at PRC before Smith and Orgeron, are all invested in finishing what they started.

PRC, Poplarville, and Picayune cheer have a whole month to prepare for Nationals. At the moment Hebert and Stromeyer aren’t nervous about it. When asked what they want to accomplish at Nationals, Stromeyer’s said she definitely wants to make it to finals.

“Last year we only made it to the semifinals which is fine but I definitely want to reach finals.” Humbly she added, “I really want to place top 3 that’s the real goal.”

Both captains and coaches dove into what they needed to accomplish Stromeyer’s goal. They’re all a one-minded unit that sees their goals clearly with an ever-clearer game plan towards their goals.

“It’s about making every practice count…that makes or breaks everything,” said Hebert.

The 2023 National High School Cheerleading Championships will be on February 10-13 at Disney World in Orlando, FL. PRC will compete in the Super-Varsity Game Day division.

Stromeyer and Hebert said they are excited to represent Pearl River County and even Mississippi at Nationals. Hopefully PRC, Picayune, and Poplarville can place their programs on the map come February.

“It’s a big year for us but also Pearl River County as a whole because all three schools be going to Nationals for the first time. So I think it is neat we have three really good cheer teams competing and not only representing their state but our county… People are going to know where Pearl River County is after nationals,” said Smith

The Item will report on the results after the conclusion of the competition. But Nationals can be watched through a UCA Varsity TV subscription. Or follow each school’s page on Facebook, as they will be reporting the competition as well.