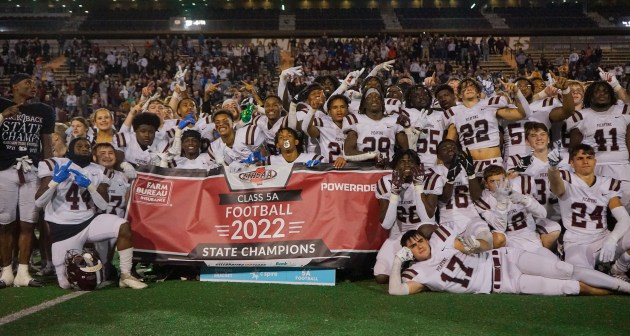 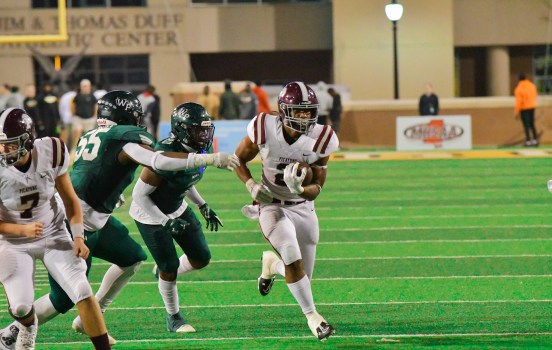 The Picayune Maroon Tide football team is your 2022 5A Mississippi State Champions after beating the West Point Green Waves, 31-21. Picayune trailed 14-9 at the half, but a third quarter surge from their offense leaped them into the lead. From that point on, Picayune never looked back until they held up the gold ball.

The Picayune football team wrote history that night. For the first time in school history the football program has won back-to-back state championships. Along with that, they achieved championship status under an undefeated 15-0 record with a ongoing 26 program winning streak.

Winning back-to-back champions was a goal set days after the 2021 championship win. To witness it come to completion just less that 365 days later is an unbelievable feeling for Head Coach Cody Stogner.

“These kids aren’t normal, they’re freaking awesome,” said Stogner. “The things they’ve done all year to get to this point and to capitalize on the things they said they were going to do, I tip my hat to them man, I’m so proud to be there coach and I love them to death, I love these coaches to death too. These coaches are a big part of it as well besides the players because these players baught into to what these coaches tell them everyday,” he said.

Plans towards a historical three-peat are on hold; Stogner said he going to enjoys this win first.

Picayune received the ball to open the quarter. They drove it 66 yards down the field but their attempts to score in the end-zone came empty. Picayune settled for a field goal. Morgan Craft strikes it in for a 20 yard PAT for a 3-0 Picayune lead.

West Point struck back in just three plays. Their scoring drive came off a 41-yard touchdown pass from Kahnen Daniels to wide receiver Ahmari Cox. West Point led 7-3 at the 3:59 mark. Picayune’s following possession produced nothing after 11 plays. They unsuccessfully attempted a 4th and 11, causing a turn over on downs on the 22-yard line.

West Point struck for another touchdown, this time it was quicker than their previous on. In just two plays Daniels connected with Jalon Cooperwood for an 86-yard completion. West Point’s led grew to 14-3 in the second quarter. Three minutes before the halftime break Picayune finally broke through for a touchdown. After eight plays covering 54 yards, Dante Dowdell rushed in a one yard score on 3rd and goal. Crafts PAT was missed and Picayune trailed 14-9 at halftime.

When asked, Stogner said there were no game adjustments coming out of the half, just belief in what they were doing would pay off.

West Point received the ball but their drive ended in a punt. Picayune’s offense drove the ball down the field in just six plays for a touchdown. Dowdell capped of the drive with a 22-yard rush. Picayune’s two-point conversion was successful thanks to a Chris Davis rush. With 8:20 remaining in the third quarter, Picayune led 17-14.

Picayune’s offense got the ball back with about 2 minutes remaining. They started on the 20-yard line, three plays later Brady Robertson passed to Darrell Smith who runs nearly 75 yards after the catch to scored a touchdown. With 1:15 reaming in the quarter Picayune lead grew to 24-14.

West Point took their offensive drive into the fourth quarter; they would eventually score a rushing touchdown. With 11:54 to play in the game Picayune led 24-21.

A three-point lead wasn’t enough cushions for Picayune. So in ten plays covering 65 yards they scored again. Dowdell capped of the drive with a 37-yard touchdown run, his third of the night. Picayune led 32-21 with 6:53 remaining. At the 5:35 mark the Picayune defense made a big stop over West Point. While West Point tried to drive the ball up the field they fumbled it and Picayune recovered on the 40-yard line.

With the led, ball possession and five minutes to play, Picayune ran the clock down to zero, clinching a 5A State Championship.

The 2022 Picayune football team made school history Friday night, becoming the first team to win back-to-back state championships. Before the Game Picayune Payton Wells was awarded Scholar Athlete of the Year. After the game Dowdell was named MVP, scoring three touchdowns off 28 carries for 190 yards.

With the football season at its conclusion, the Mississippi Association of Coaches announced the 2022 All-State Teams.