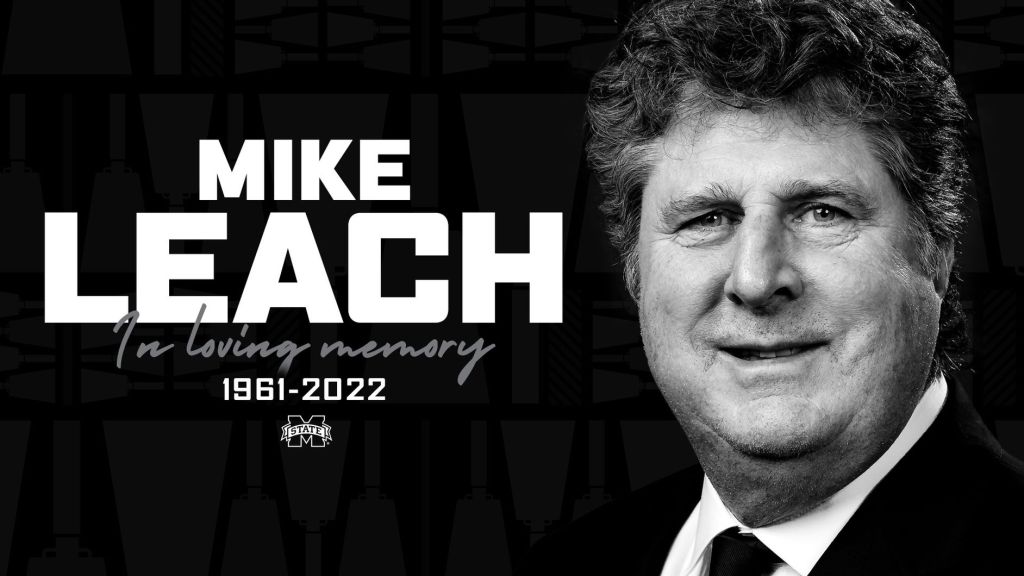 In a statement, the Leach family said: “Mike was a giving and attentive husband, father and grandfather. He was able to participate in organ donation at UMMC as a final act of charity. We are supported and uplifted by the outpouring of love and prayers from family, friends, Mississippi State University, the hospital staff, and football fans around the world.  Thank you for sharing in the joy of our beloved husband and father’s life.”

Mississippi State University President Mark E. Keenum said: “Coach Mike Leach cast a tremendous shadow not just over Mississippi State University, but over the entire college football landscape. His innovative “Air Raid” offense changed the game. Mike’s keen intellect and unvarnished candor made him one of the nation’s true coaching legends. His passing brings great sadness to our university, to the Southeastern Conference, and to all who loved college football. I will miss Mike’s profound curiosity, his honesty, and his wide-open approach to pursuing excellence in all things.

“Mike’s death also underscores the fragility and uncertainty of our lives. Three weeks ago, Mike and I were together in the locker room celebrating a hard-fought victory in Oxford. Mike Leach truly embraced life and lived in such a manner as to leave no regrets. That’s a worthy legacy. May God bless the Leach family during these days and hours. The prayers of the Bulldog family go with them,” Keenum said.

MSU Interim Athletics Director Bracky Brett said: “We are heartbroken and devastated by the passing of Mike Leach. College football lost one of its most beloved figures today, but his legacy will last forever. Mike’s energetic personality, influential presence and extraordinary leadership touched millions of athletes, students, coaches, fans, family and friends for decades.

“Mike was an innovator, pioneer and visionary. He was a college football icon, a coaching legend but an even better person,” said Brett. “We are all better for having known Mike Leach. The thoughts and prayers of Mississippi State University and the entire Bulldog family are with his wife Sharon, his children and the entire Leach family.”

Leach, who was named Mississippi State’s 34th head football coach on January 9, 2020, was finishing his third season in Starkville and 21st as a head coach. Forever a college football icon, he leaves an incredible legacy as a husband, father, friend and leader of young men.

Born in Susanville, California to Frank and Sandra Leach, Mike was raised in Cody, Wyoming. After graduating with honors from BYU in 1983 where he played rugby, Leach earned a master’s degree from the U.S. Sports Academy and his Juris Doctor from Pepperdine University, where he graduated in the top one-third of his class.

For nearly four decades, Leach had an unmatched impact on the game of football including thousands of student-athletes, coaches and staff. He was a two-time national coach of the year, three-time Power 5 conference coach of the year and the mastermind behind the NCAA record-setting “Air Raid” offense.

The accomplishments for Leach in his 21 years as a head coach were long and distinguished. A proven winner who established a culture of excellence at every stop of his career, Leach compiled a 158-107 (.596) record, guided his squads to 19 bowl games, produced seven seasons of at least nine victories, captured two conference division titles, became the winningest coach in Texas Tech history and set school records for bowl appearances at both Texas Tech (10) and Washington State (6). During 10 of those 21 seasons, Leach’s passing attack led the FBS – six at Texas Tech and four at Washington State.

One of the most successful coaches in the history of college football, Leach’s 158 career wins as an FBS coach are the second-most among active SEC coaches and the fifth-most among active Power 5 coaches. Of the 50 most productive passing yardage seasons in FBS history, 10 came from quarterbacks coached by Leach since his hiring as head coach at Texas Tech in 2000. That included one season by Kliff Kingsbury, one by B.J. Symons (2003), one by Sonny Cumbie, three by Graham Harrell (2006-08), one by Connor Halliday, one by Luke Falk (2015), one by Gardner Minshew II (2018) and one by Anthony Gordon (2019).

A passionate educator, mentor, historian and lifelong learner, Leach had great admiration for academics. He instilled that in his players, as his teams routinely set records for GPA and graduation rate. A masterful storyteller, Leach authored a New York Times best-selling autobiography in 2011 titled Swing Your Sword: Leading the Charge in Football and in Life. He later wrote Geronimo: Leadership Strategies of an American Warrior in 2014.

Leach began his coaching career in 1987 as an assistant at Cal Poly-San Luis Obispo before coaching stops at College of the Desert in 1988 and as a head coach in the European Football League in Pori, Finland, in 1989.

Leach teamed up with Hal Mumme at Iowa Wesleyan College in 1989, where the duo developed the renowned Air Raid offense. From 1989 to 1991 Leach served as offensive coordinator and line coach for a unit that led the NAIA in passing yardage one season and finished second the other two. Iowa Wesleyan quarterbacks passed for more than 11,000 yards in Leach’s three seasons and broke 26 national records.

Leach joined Bob Stoops’ Oklahoma staff as offensive coordinator in 1999. He directed a Sooner offense that went from one of the worst in the Big 12 Conference to one of the best. In just one year, OU’s total offense numbers improved from 293.3 to 427.2 yards per game. Under Leach, the Oklahoma offense set six Big 12 Conference and 17 school records.

Leach went on to spend 10 seasons as head coach at Texas Tech (2000-09) where his squads produced bowl appearances all 10 years. He compiled a school-record 84 victories, a school-record five bowl wins and eight consecutive seasons of at least eight victories.

The architect of the most prolific passing offense in the country, Leach received three national coach of the year awards in 2008 – the Woody Hayes Award, Howie Long/Fieldturf Coach of the Year and George Munger Award. Leach’s offense captured six NCAA passing titles and three total offense titles during his 10 seasons in Lubbock.

Leach led Texas Tech to one of the most memorable seasons in school history in 2008 as the team set a program record with 11 regular season wins en route to an 11-2 record. The win total tied the mark, set previously by the 1953 and 1973 Red Raider squads. Numerous accolades poured in from across the country as an unprecedented four players earned first-team All-America status, in addition to Leach’s three coach of the year honors. Harrell, offensive tackle Rylan Reed and offensive guard Brandon Carter each garnered first-team honors, while wide receiver Michael Crabtree was honored as a unanimous All-American and the Biletnikoff Award winner for the second-straight season.

A total of 18 players were drafted at Texas Tech under Leach’s watch and 21 others signed free agent contracts. In the spring of 2009, four players were selected among the first four rounds of the NFL Draft, marking the most successful draft for Texas Tech in the Leach era.

The program made strides academically as well under Leach. During his 10 years, Texas Tech was recognized as one of the nation’s top institutions for consistently being above a 70 percent graduation rate, according to the AFCA.

Following his tenure at Texas Tech, Leach spent eight seasons at the helm at Washington State where he compiled a 55-47 (.539) record and was named the 2018 American Football Coaches Association National Coach of the Year and two-time Pac-12 Coach of the Year (2015, 2018). Leach spearheaded WSU to a school-record six bowl appearances and became the first coach in school history to lead the Cougars to five consecutive bowl games. They also led the nation in passing offense in four out of his last six seasons in charge.

The 2018 campaign saw Leach produce one of the finest coaching performances as WSU posted its first 11-win season in school history and a share of the Pac-12 North Division. The Cougars were ranked in the top 13 of each College Football Playoff rankings, including four consecutive weeks at No. 8. WSU capped the season with a win over Iowa State in the Alamo Bowl and finished No. 10 in the Associated Press and Coaches polls. Senior quarterback and Mississippi native Minshew captivated the nation, leading the FBS in passing yards per game (367.6).

In the spring of 2019, Leach taught a five-week course at WSU on Insurgent Warfare and Football Strategies, along with former Washington State Senator Michael Baumgartner.

Leach arrived in Starkville on January 9, 2020, as Mississippi State’s 34thhead football coach. He led the Bulldogs to a 19-17 record, including an 8-4 mark in 2022, and bowl appearances in all three seasons. Leach’s offense led the SEC passing in each of the last two seasons. The Bulldogs defeated seven AP Top 25 opponents during Leach’s MSU tenure, which tied for third most by a Bulldog head coach. Leach coached MSU to its two largest comebacks in program history in 2021.