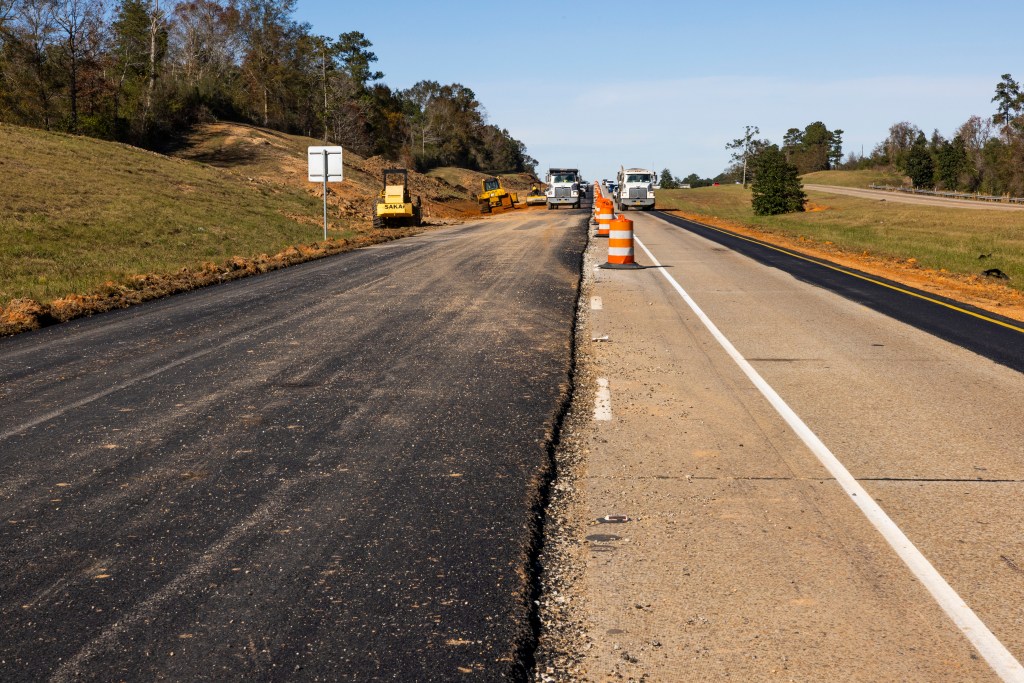 “In 2023, you can count on seeing more infrastructure work being done in South Mississippi,” said King. “Thanks to additional resources, more MDOT projects have been approved than ever before. These new projects will increase safety and efficiency for the traveling public throughout the region. We are proud of the work that has been accomplished and look forward to making even more progress.”

Lottery funded projects throughout the district

Paving work is nearing completion on a $3.3 million overlay project on State Route 503 in Jasper County. This project stretches 23.3 miles from State Route 528 to the Newton County line. This contract was awarded to Dunn Roadbuilders of Laurel. The project is expected to wrap up spring 2023.

In Harrison County, a $2.6 million mill and overlay of U.S. 49 is now complete. The project stretches from north of Creosote Road to north of O’Neal Road. This contract was awarded to Warren Paving, Inc. of Hattiesburg.

Work is complete on a $4.8 million overlay project on U.S. 90 in Jackson County. The project stretches seven miles from State Route 57 to the West Pascagoula River Bridge. This project was awarded to Warren Paving.

Work will begin in spring 2023 on a $212.6 million project to grade, drain, bridge and pave approximately 9 miles of State Route 57 from I-10 to Vancleave. A portion of the project will involve widening SR 57 from two to four lanes along the existing route from I-10 to Gautier-Vancleave Road. A new four-lane alignment for SR 57 will be constructed connecting it from Gautier-Vancleave Road to the Lake O’Pines area. The project will alleviate congestion in the area and expand the capacity of the roadway, which is a hurricane evacuation route.

The project was awarded to W.G. Yates and Sons Construction Company of Jackson and is expected to wrap up in 2027.

Following damage sustained by Hurricane Zeta, a project is ongoing in Harrison and Hancock Counties to repair or replace traffic signals and information technology equipment, returning it to a fully functional condition. The contractor will repair damage at communication infrastructure locations. Signal and information technology equipment will undergo repairs at 42 intersections along U.S. 90 from Bay St. Louis to Biloxi.

This nearly $5 million project was awarded to Webster Electric of Collinsville. Work is expected to be complete in late 2023.

A similar project will soon be underway in Harrison County to repair or replace traffic signals and information technology equipment. Work will take place at 51 signalized intersections along U.S. 49, I-10, I-110, State Route 605 and State Route 67.

This $3.4 million project was awarded to Powell Construction of Magee and is expected to begin spring 2023.

Safety improvements on I-59 in Forrest County

A safety improvement project is underway in Forrest County. This $66.7 million project stretches 14 miles from the Lamar County line to just south of Moselle.

Rubblization is ongoing in the outside southbound and northbound lanes from mile marker 76 to 80. Traffic will soon be placed in a head-to-head configuration to rubblize pavement adjacent to the bridges near mile marker 78. During the course of the project, unsuitable dirt was discovered underneath existing pavement. To correct the issue, the dirt was replaced, and earthwork is taking place in the area. This project was awarded to Dunn Roadbuilders and is expected to be complete in 2024.

A safety improvement project on U.S. 49 is nearing completion in Forrest County. The project stretches from the Stone County line to South Gate Road. Grading work is taking place in the median, and pavement is being placed in the crossovers.

This $41 million contract was awarded to T.L. Wallace Construction of Columbia and is expected to wrap up in spring 2023.

A bridge replacement project is underway to replace the State Route 42 bridge over Tallahalla Creek in Perry County. Earthwork is taking place, and crews are driving piles and setting drill shafts.

This $17 million project was awarded to Cotton Creek Transport of Laurel. The bridge replacement is expected to be completed in fall 2023.

The second phase of construction is set to begin in late 2023 and will include the construction of a new bridge over the East Hobolochitto Creek, which will have shoulders and include a protected sidewalk with a concrete barrier for pedestrians. The entire project is estimated to be completed in 2025.

Intersection improvements on U.S. 84 in Wayne County near completion

A project to improve the intersection on U.S. 84 at Reservoir Road/Magnolia Hill Road and State Route 184 is nearly complete in Wayne County.

This $4 million project was awarded to R & J Construction Company, Inc. of Laurel. Work is expected to wrap up winter 2023.

Overlay on State Route 63 in Jackson and George counties

An overlay project on State Route 63 in Jackson County is now complete. This $4.5 million project stretches from State Route 614 to the George County line. It was awarded to Huey Stockstill, LLC of Picayune.

Another overlay project on State Route 63 is underway in George County from Sally Parker Rd. to U.S. 98. This $7.6 million project was awarded to Warren Paving and is expected to be completed in 2023.

Overlay project on U.S. 90 in Hancock County to begin next year

An overlay project to pave 5 miles of U.S. 90 in Hancock County from Rifle Range Road to Lower Bay Road will begin in 2023. This $6 million project was awarded to Huey P. Stockstill of Picayune and is expected to wrap up in summer 2023.