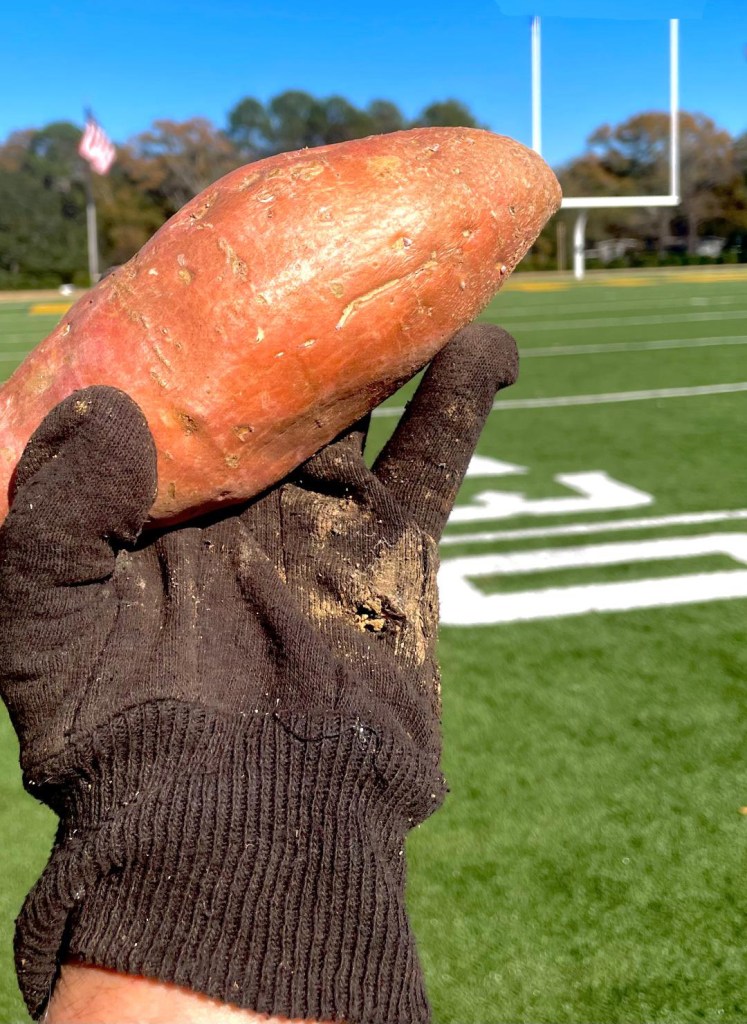 Want to participate in a sweet-tater toss? Sorry, there isn’t one.

I recently got into a horts vs. sports tussle with fellow tipplers during a World Cup football match, when an advert came on with an overt message about gardening being less interesting than sports. Meant to be light-hearted, it featured well-known sports commentators dressed as arched-eyebrow garden experts, tongue-in-cheekily comparing their flower growing skills as the announcer gibed “Aren’t you glad they are into sports?”

As if gardening is an inferior pastime. As Bugs Bunny would say, “Sheesh! What maroons!”

Not trying to hijack the term “woke” here, but mocking folks with different interests and skills isn’t cool. Mama wouldn’t approve. And don’t they realize that the fella sitting next to them just finished shoveling a truckload of compost after laying a rock wall, without gloves?

I mean, I doubt anyone would suggest that Lady Chatterley’s gardener was lacking in anything other than social graces.

So here’s my idea: During the off season, turn football and baseball fields over to gardeners for earliest tomato, pea shelling, giant pumpkin, and ‘tater tossing competitions. Talk about a level playing field!

Instead of a band and cheerleaders, bird songs and laughter.

Kids would learn to dig, harvest, and cook, rather than punt, pass, and kick. The field track could become a pop-up market for tools, wheelbarrows, jelly jars, knee pads, and bird netting, and the field house would be a tinker shop where you’d have blades sharpened and tiller engines adjusted. The announcer’s booth? The Master Gardener info and cheerleading center.

In the garden arena, we would encourage, not fine our best players for using rooting hormones and growth enhancers. But then I guess we might have to sanction the overuse of pesticides.

All this comes to mind as I try to figure out where fan-atic gardeners fit into society. With football fans we expect a fairly small but highly visible percentage to get a bit rowdy, and everyone around them understands what’s going on, and forgives their expressive fervor. But it appears to me that zealous gardeners are about the same percentage of the general population as exuberant sports fans. It’s just that our flower shows are less raucous.

Oh, we are enthusiastic, and we do brag about tomatoes and compare stats and keep records of which performs better than others, often give one another ribbons and awards for superior results. Yet we’re often denigrated as…pansies. Pardon the outdated affront.

We may over-accessorize with gnomes, flamingoes, and bottle trees, but that’s nowhere near as nutty-looking as football fans with their grease paint, banners, and cheese- or horned- or other-headed hats. But, unlike weekend football warriors who clean up before work, full-blown garden fans can’t wash off the grease paint and fade into the crowd. We are out there all the time. And we love rain delays.

Anyway, here’s wishing sports geeks would stop kicking sand in the faces of hort-hunks and honeys. True, gardening doesn’t require size or swiftness, but anyone can participate. Even older folks with blown-out knees (hint to aging sports stars-turned commentators).

All this is in jest, of course. Sorta. Meanwhile, I’m not holding my breath waiting to see the mugs of Victory Garden and HGTV hosts on cereal boxes any time soon.

Felder Rushing is a Mississippi author, columnist, and host of the “Gestalt Gardener” on MPB Think Radio. Email gardening questions to rushingfelder@yahoo.com.