It marks the end of an era at PRC varsity dance 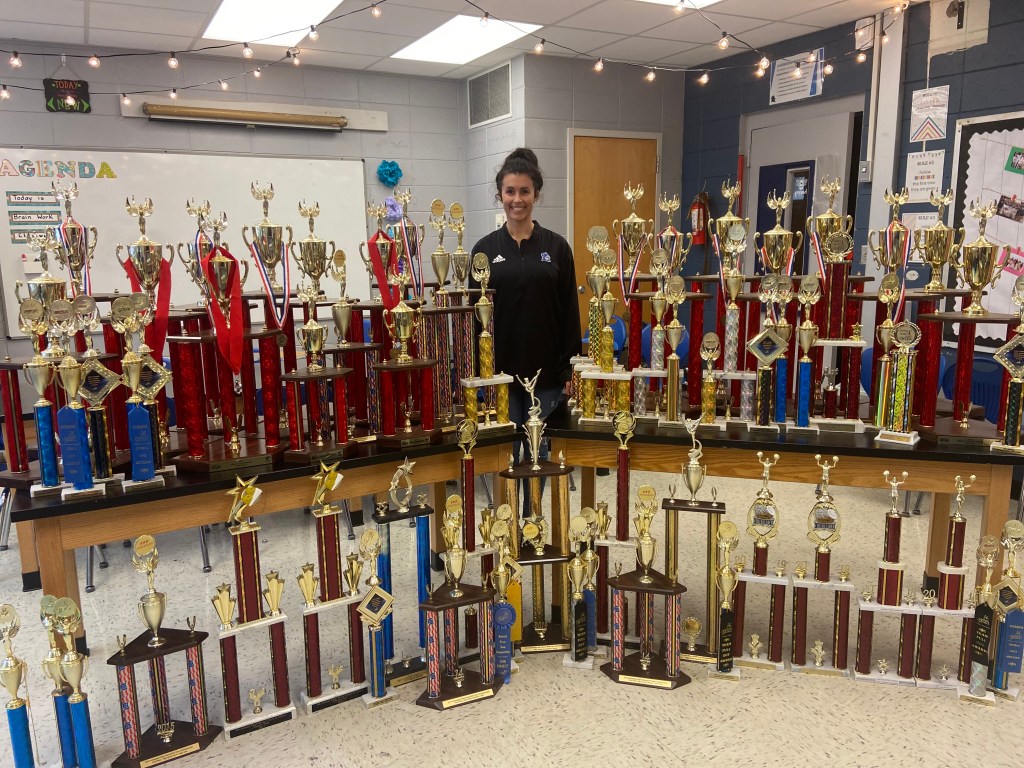 The Pearl River Central High School Blue Angels dance team had its usual impressive performance at the MISSHSAA championships on December 9 in Jackson, finishing second in jazz and third in pom, and providing an amazing finale to Coach Sadie Penton’s 10-year run as coach of the squad.
Penton announced to her team in October that this would be her last year leading the squad. It was shocking and sad news to many in the PRC School District, given the unprecedented success that Penton has achieved.
The perfect, story-book ending would have seen the Blue Angels win two more state titles and carry their leader off the floor in tremendous victory, but it wasn’t meant to be.
Although it was a heartbreaking end for these talented and hard-working ladies, it didn’t do anything to tarnish Penton’s remarkable reputation.
That was cemented long ago.
Penton’s teams chalked up 14 – count ‘em, 14 – state championships. No, that is not a misprint.
And the other six performances were top-three finishes. In other words, her team won or almost won state all 20 times they competed.
While the coach is quick to give her dancers all the credit, Penton’s importance to the squad, to the school, and to the community cannot be overstated. Winning a state title is special – and really difficult. Winning multiple state titles – even more rare. But winning 14 of them?
Really?
There aren’t adjectives adequate enough for that kind of accomplishment. And the 14 titles are not of the “participation trophy” variety, so popular in today’s society. No, these were well-earned, against top-notch programs throughout the state.
As one of Penton’s fellow coaches in the PRC School District, I have been amazed at the dynasty that she has forged. While I work at the high school and she works at the middle school and we don’t often cross paths, I have a little bit of an idea as to why her teams have been so successful. My classroom is right outside of the gym, where the Blue Angels sometimes practice. To be fair, they practice in the “Safe Room,” outside, or wherever else is available on a given day, but the point is that she runs a fun, yet no-nonsense practice. She demands excellence, and that’s what she has gotten, year after year.
Perhaps an even better indication of the Blue Angels’ success, at least from my perspective, is the attitude that her dancers bring to the classroom. As an Honors English III teacher, I can’t recall any Blue Angel in my class in the last few years who was anything but polite, extremely organized, and self-motivated, traits that, at least in part, have been reinforced at dance practices and competitions. It is a confident, but never cocky, disposition that stresses the need to cover every little detail and to strive for excellence.
I knew something big had happened when I saw several girls in my class and in the halls crying one day. It turns out that Penton had just announced that this would be her last hurrah.
As Diana Kawafha, a dancer and one of my honors students, said through tears, “ ‘Coach P’ IS the Blue Angels. It will never be the same.”
Only great coaches elicit those types of reactions.
I’m sure that there are a few former team members and parents who have disagreed with some of Penton’s decisions and methods through the years, but name me one successful coach who has no critics. There are none. As a (far less successful than Penton) coach for more than 25 years, I know that criticism, whether warranted or not, will always be there. To Penton’s detractors, I would respectfully remind them that sometimes, as the saying goes, you don’t fully appreciate something until it’s gone. For years, several schools tried to lure Penton away; she must have been doing many more things right than wrong.
Penton, who is one of several educators in her family, was married on October 23 to Bo Black and will now have new priorities in her life. Before that, she was, in a real way, married to her Blue Angels.
Not just because of her titles, but because of the difference she has made in the lives of so many, her career should be applauded by everyone in Pearl River County. If she has finished her time as a dance coach, she leaves behind a remarkable legacy. If she eventually coaches again, some school will be lucky to scoop her up.
Either way, at PRC, it was a remarkable run.