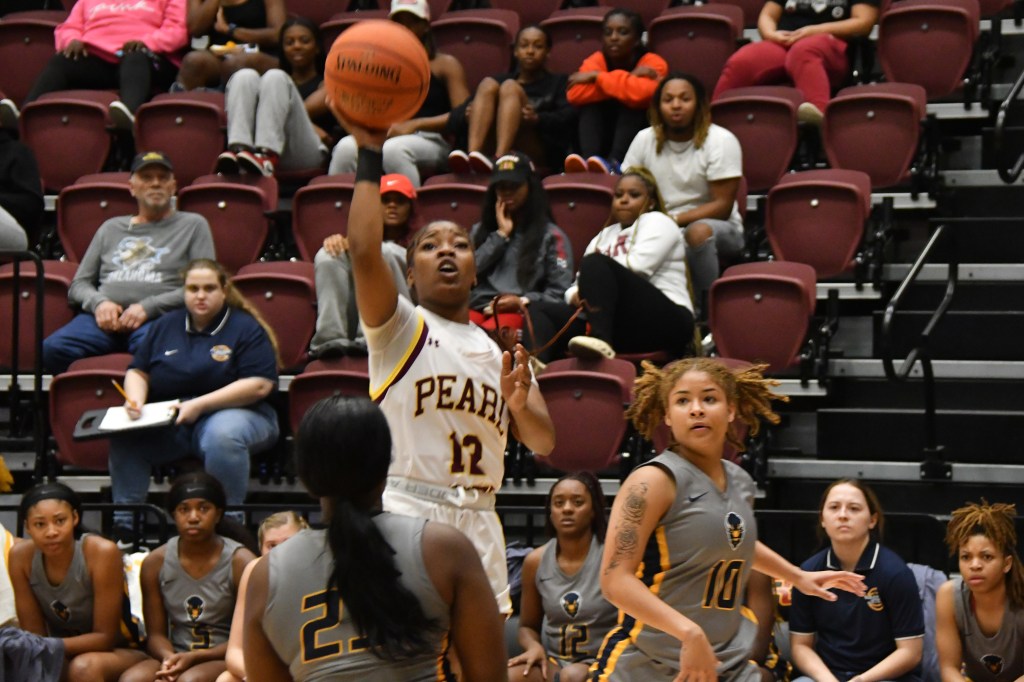 POPLARVILLE, Miss. — The opening night of Thursday’s Microtel Tip-Off Classic was a success for the Pearl River women’s basketball program. Reloaded after the program’s MACCC Championship season a year ago, the Wildcats maneuvered through early scoring woes to run away from the visiting Southern Union Bison 52-30 inside Marvin R. White Coliseum.

“Early on, we let shot missing and shot making determine how hard we played and whether or not we were executing,” head coach Scotty Fletcher said. “Obviously, this was the first time that we’ve played at home. I knew the jitters and excitement would be there. I felt at times we were a little bit soft and we didn’t execute the way we needed to. I’m glad that we were able to pull out the win.”

The Wildcats (1-0 overall) shook off some early rust in the opening frame Thursday against the Bison (0-1). With the exception of a Marcavia Shavers (Biloxi) bucket in the paint midway through the frame, PRCC’s early 9-1 lead was built on free throws. The Wildcats’ defense locked down the Bison early in the contest, but it took a little longer for things to loosen up on the offensive side of the court.

Buoyed by a 10-4 lead at the first break, the Wildcats came out firing to open the second quarter. Khyla Ragins(Booneville; Harrison Central) hit a big 3-pointer to open the frame, marking the first long-range bucket of her collegiate career.

Following a putback by Keshunti Nichols (Pearl) that pushed PRCC’s lead to 15-4, Hama’ya Fielder (Philadelphia; Neshoba Central) got in on the scoring. The sharp-shooting freshman nailed a 3-pointer off a dish from Ty’Mesha Reed (Meridian) and soon after drained another one to push PRCC’s lead to 21-2.

Tierra Simon (Houston, Texas; Heights) later got in on the scoring. Alexis Arrington (Terry) drove the baseline and dished off a pass to Simon in the paint. The 6-foot-2 Prairie View A&M transfer easily converted the pass to give PRCC a 22-9 lead and the Wildcats took a 23-9 advantage into halftime.

Fielder picked up right where she left off to open the third quarter, pulling in a pass from Shavers and knocking down her third 3-pointer; the latest one was in front of the PRCC bench and extended the Wildcat lead to 26-11.

Following a Reed jumper, Southern Union went on its lone long run of the game, scoring seven unanswered. The run pulled the Bison within eight, 28-20. After trading baskets, PRCC closed out the third on a commanding 10-1 run to extend its lead to 39-23. Following a pair of free throws from Nichols, Halle Traylor (Tupelo) caught an in-bound pass and drained a 3-pointer in the corner. After Nichols scored in the paint, Traylor converted a tear drop shot to punctuate the run.

Nichols and Traylor continued their strong form to open the fourth quarter. After Nichols scored in transition, Traylor hit a 3-pointer from well beyond the arc to give PRCC’s its largest lead at 44-24.

With the commanding lead, the Wildcats were able to see out their opening night victory.

Traylor led the team in points with 11. The sophomore also had five rebounds. Nichols was the only other Wildcat in double figures, finishing with 10 points. She also hauled in five rebounds, two assists and two steals.

Reed did a great job of distributing the ball, assisting on five baskets.

The Wildcats turn right back around and host Gadsden State at 4 p.m. Friday to conclude the Microtel Tip-Off Classic. The game will be livestreamed on PRCCMedia.com/gold.

Tickets are available at PRCCAthletics.com/tickets.