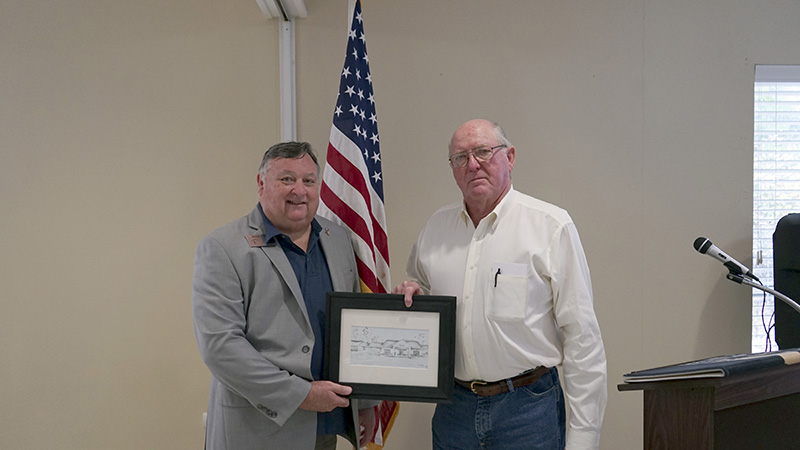 Wednesday morning, the Senior Center of South Pearl River County held a Veterans Brunch where several veterans spoke. The event was a chance to honor those who served.

Members of the NJROTC at Picayune Memorial High School presented the colors, followed by an invocation from Sgt. Kay Perry.

The table is smaller than other tables signifying the frailty of one person against his or her oppressors. The white tablecloth symbolizes the purity of the response of military personnel to this country’s call. The empty chairs represent their absence. The use of a round table represents this country’s concern for them is never ending, the Bible represents the strength gained through faith. Black napkins stand for the emptiness these warriors have left in the hearts of their families and friends. The single red rose in the vase signifies the blood they may have shed to ensure freedom and also symbolizes continued faith for their return. The red ribbon represents the love of the county. The lit candle symbolizes the light of hope that is meant to illuminate the pathway home for missing soldiers. The slice of lemon reminds of their bitter fate. A pinch of salt symbolizes the tears shed by families. The inverted wine glass symbolizes the inability to share a toast.

The keynote speaker of the morning was Major General Laughlin Hudson Holliday, retired ARNG. He shared a heartwarming story about his trip to Germany, continuing the memory of losing four soldiers, and his transition to learning how much freedom really costs after saying goodbye to his son before leaving for Iraq.

“When I had to say goodbye to my son then I started to understand what the real cost of freedom is. When you say goodbye to your child and see him wondering if you’ll ever see him again, then you’ll start to realize what freedoms all about,” said Holliday.

He then asked how the public can honor veterans for their service and sacrifice. He said that while there is nothing they can do or say that will adequately thank them, parades, meetings like the one held Wednesday, and recognizing them is the least people can do.

“We should live our lives so that we are credited to those who went before us, and an inspiration for those who are going to follow,” said Holliday.