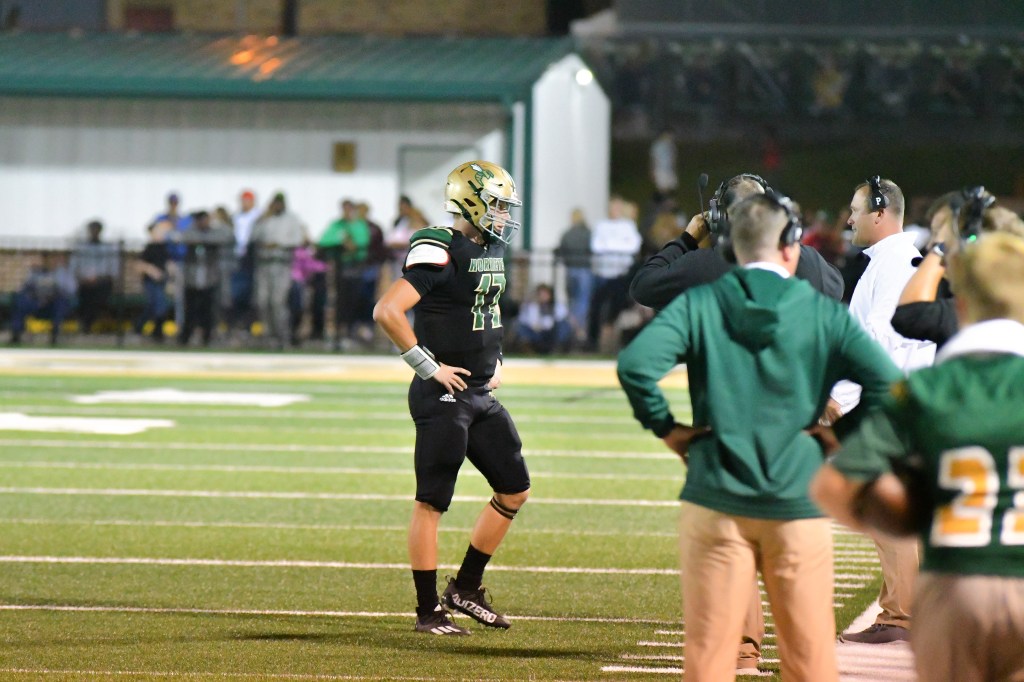 Left, senior quarterback Matt Will receiving a play call from Head Coach Jay Beech during Poplarville’s previous win over with Pass Christian in the first round of the 4A State Championships.

The Poplarville Hornets reached an unwanted end to their season after failing to hold off Stone in the remaining five minutes of regulation. Poplarville’s first half 28-18 lead would turn into a 32-28 comeback win for the Stone Tomcats.

Both teams dealt with bangs and bruises in this hard nose matchup. Poplarville had their share of players dealing with minor injuries but despite it all, Head Coach Jay Beech said his Hornets played as hard as they could.

“Not taking anything away from Stone, they had a great plan but we had guys really banged up, really trying to push through it and play with the game on the line, but we were a little to banged up to finish out strong,” he said.

Poplarville began the game in typical Hornets fashion, fast and on the board first and often. Avan Jarvis scored all four touchdowns for his team, raking up 143 yards on 27 carries. Poplarville led 14-0 in the opening quarter then Stone finally got on the board after an 11-yard touchdown run by Daylon Collins.

In the second quarter Stone completed a 40-yard touchdown pass. They failed to convert for two points leaving Poplarville ahead, 14-12.

Poplarville pushed their lead to 21-12 after another rushing touchdown by Jarvis. With five minutes remaining in the second quarter, Stone completed a 30-yard touchdown pass. They missed the extra PAT, leaving Poplarville with a 21-18 lead. Before the half, Poplarville scored again off a rush. After the PAT they led 28-18.

Stone scored in the fourth quarter with a four yards pass completion. After the PAT, Stone was within three points, 28-25.

With less than three minutes remaining, Poplarville’s worst nightmare occurred. They fumbled the ball and Stone recovered it on Poplarville’s 35-yard line. Stone wasted no time scoring a 35-yard touchdown pass. After the PAT, Stone led 32-28.

Poplarville had two opportunities on offense for a comeback, but being so banged up and not enough time, a loss was inevitable. Beech said they were able to move the ball effectively in the first half. The second half was more of a struggle due to Stones mid game adjustments.

And that was it for the Poplarville Hornets. They achieved a lot in this 2022 season as district champions with an 11-2 record. On top of that, don’t be surprised if several Poplarville players are voted into all-league Mississippi Coaches All-State Football teams. Several of the Hornets had outstanding season and deserve their names in that conversation. Those results will be released by coaches around the state who are members of the Mississippi Association of Coaches after the conclusion of the state championships.

The Hornets will be waving goodbye to 14 seniors. Beach said they were an outstanding class and their presence will be greatly missed.

“They poured a lot of time and effort into becoming great football players… their class as a whole were outstanding leaders, it will be really hard to replace them but while they were here they provided and proved to be a great example to the younger kids coming through the program on what you need to do and what you need to be to become a great football player,” said Beech.