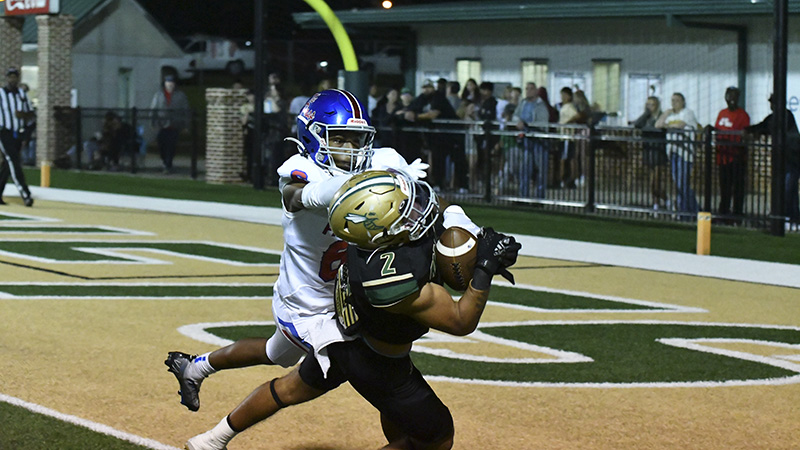 Maurice Travis makes a diving catch in the end zone during Poplarville’s first round win over Pass Christian.

The Hornets clinched a 40-12 win over the Pass Christian Pirates Friday night in the first round of the playoffs. The Hornets had a hot start, leading 34-0 at half.

Poplarville’s first score came at the 10:10 mark. After four plays covering 60 yards, Maurice Travis capped the drive off with a 5-yard rush. The Hornet’s second score occurred in 12 plays covering 66 yards when Travis scored his second touchdown of the night this drive off a six-yard rush. Poplarville’s third touchdown occurred at the 10-minute mark, when Matt Will connected with Benny Jarvis Jr. for a 33-yard strike. The fourth touchdown came at the 9:24 mark of the second quarter when Will completed a 22-yard over the shoulder pass to Travis to lead 27-0. Poplarville’s final score of the half came at the 6:16 mark when Will took it 82 yards up the middle for a 34-0 touchdown.

Out of the third quarter Pass Christian found the end zone at the 8:43 mark, but their PAT was blocked and the score was 34-6.

Poplarville found the end zone in the mid fourth quarter when Travis capped of a drive with a 68-yard touchdown run, giving the Hornets a 40-6 lead. Pass Christian scored the game’s final touchdown at the 7:46 mark with a goal line rush but failed to convert for two points.

“We got to practice better and hard so we can be ready come Friday night,” he said.