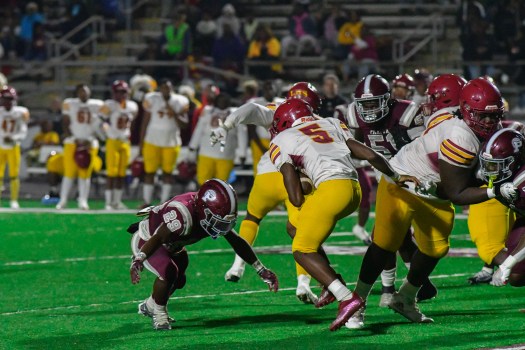 Amarion Tyson creeps low for a tackle during Picayune’s first round win over Laurel. 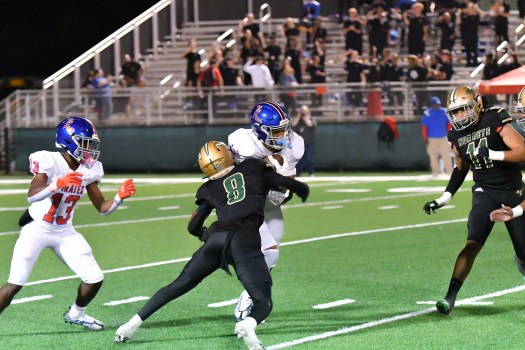 Pearl River County football is still underway this Friday as the Picayune Maroon Tide host the West Jones Mustangs and the Poplarville Hornets host the Stone Tomcats. Both games will kick off on Friday, Nov. 17 at 7 p.m.

Picayune enters the 5A Elite Eight championships at 12-0, West Jones’s record is 8-3, coming off a 38-0 shutout against East Central.

Picayune’s defense is making a big statement this post season. In their first round win over Laurel, Picayune intercepted four passes, had 1 sack, 7 QB hurries, one forced and recover fumble, with a total of 54 tackles. Junior defensive back Amarion Tyson picked off two passes in that game.

When asked about their defensive backs ball hawking ability, he said,

Tyson leads the Maroon Tide in tackles per game with 11.5. Surprisingly enough, the next closest player is Jamonta Waller, who averages 7.6 tackles per game. Tyson said the defensive chemistry his players have with each other was built from playing ball as children. Those competitive childhood back yard games manifested into a one-minded defensive unit at Picayune Memorial High School.

“When you see us play we all play with the same mentality and the same anger,” Tyson said.

“They’re really sound and good on defense, they lean heavily on their defense. Offensively they want to run first. They’re well coached and a tough hard nosed football team,” he said.

When facing an opponent that mimics your own team, winning comes down to which one wants it more.

“Its going to be an effort game, stuff from day one fundamentals, who can commit the least amount of penalties who can create the most turnovers, special teams is going to be big this game…we just got to play Picayune football,” said Stogner.

The Picayune defense has a simple game plan. Tyson said they want to stop West Point’s run game early, and bait West Point into beating then with the pass.

“When we stop their run game, I think it’s going to be hard for them to throw the ball,” he added.

Poplarville enters the 4A Elite Eight championships at 11-1. During their playoff run the Hornets defense has been nothing less that spectacular. Junior defensive back, Lawrence Jamison who leads in the team in interception (3) said preparation and grit it what gives them an edge. He reflected on the programs previous seven years and its continued growth to reach another 4A State championship for its community.

“We’ve just been balling, trying to get there (Championship) and domination any opponent that we have on the field Friday night,” he said.

Hearing about the older generation of teams before them, drives the current Hornets to finish what’s been started. For Jamison, it was more that hearing about it, he witnessed it, watching his older brother lead a team into a deep playoff run.

“Me being in middle school I was coming to summer workouts and watching him and them balling and grinding and wanting to get to that state championship. It just almost implants in younger brothers, younger cousins for them to want and go chase that same thing,” he said.

The Stone Tomcats are a familiar opponent to Poplarville in the previous years. Stone is a defensive minded team that also executes at a high level offensively. The 8-2, Tomcats average 12.4 yards per pass completion, catching 67 percent of their passes. They average 160 passing yards per game. Stone runs the ball pretty well, covering 5.9 yards per carry and rushing 191 yards per game.

Come Friday, Jamison said they will trust their defensive line to put pressure on Stone’s quarterback. Also the rest of the defensive backs have been getting extra reps in, preparing for Stone’s passing game.

“I feel confident that our defensive line and line-backs are going to shut the run down, we’re gong to force them to throw the ball and I feel like we’re going to get some picks (interceptions) this Friday, I feel like we will for sure,” said Jamison