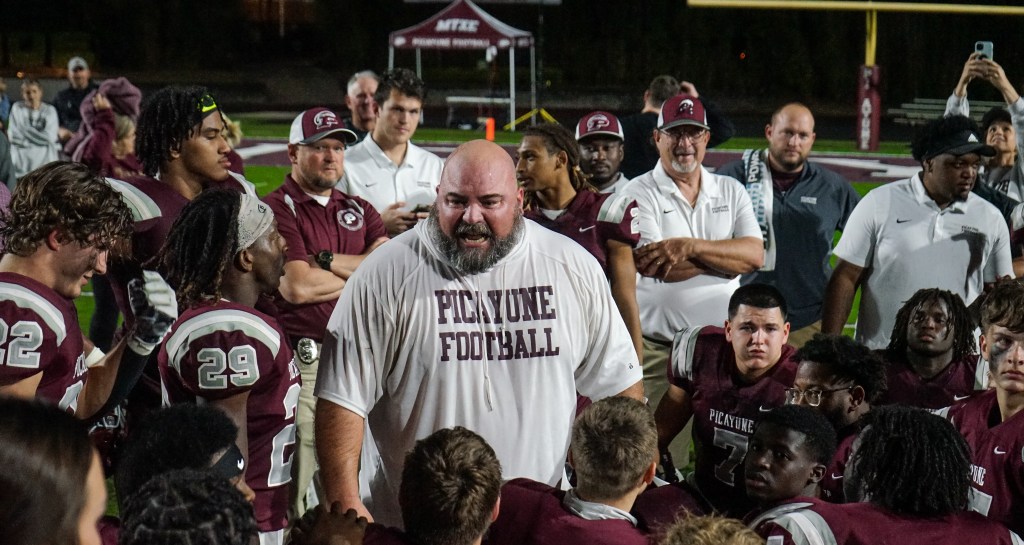 Head Coach Cody Stogner give his encouraging post game speech after beating The Gautier Gator in the south State Championships on Friday Nov, 25, 2022.

Before any of that is written in stone, Picayune must beat the West Point Green Waves this Friday, Dec. 2 at Southern Mississippi M.M. Roberts Stadium at 7 p.m.

The last time these two went head to head was in last year’s 2021 championship game where Picayune topped West Point, 40-21.

With some much a stake and probably the biggest game of the season approaching, Picayune practice plan stays the same. If it isn’t broke they don’t fix it.

“Nothing changes from day one back in August. We are not going to try and reinvent the wheel, we’re going to do exactly what we’ve been doing everyday, and that’s just getting better in blocking, tackling and fundamentals,” said Head Coach Cody Stogner.

Stogner said all aspects of the their game will be ironed out this week because he believe they have yet to play a perfect game.

West Point has a good running and defensive team and they’re on an 11 game win streak. In their previous playoff game, West Point allowed zero touchdowns their 14-0 win over the Vicksburg Gators. West Point is a team that plays similar to Picayune. On the year West Points has rushed for 4,139 total yards. Their leading rusher is Kahnen Daniels who has 1,875 yards this season.

Picayune on the year racked up 4,408 total yards. Dante Dowdell leads the way with 1,975. The passing yards are near the same. Statistically, Picayune out weighs West Point defensively with a 929-tackle total. West Point’s total is 595. Their leading tackler is Jhace Mallard with 59 on the season; Amarion Tyson has 155 tackles for Picayune. Picayune has also saw the endzone more than West Point this season. Seventy-six touchdowns for Picayune; 63 touchdowns for West Point.

“I’m expecting a dogfight, just straight football, nothing fancy going on in this game just two teams going right at each other,” he said.

Wells and the rest of his fellow Maroon Tide players have a grasp on the similarities they and West Point possess. But Wells believes previous hard fought games that led to wins gives them an edge.

“We’ve been in more games like this than they have through out the season, so I think it’s prepared us for what’s at stake Friday night.”

Picayune senior defensive back Tyrel McGill said enable for them to win they’ll have to fight for 48 minutes, a node to Stogner who awaits a perfect game from his players. As a senior, McGill holds a responsibility to displaying leadership on the field. He takes pride in that.

“I’m a senior Iv been here before, I know what it feels like (winning a championship), I want to help them, I want to be a leader,” he said. “I can’t wait, I want to take the time (sulk it all in), because it’s my last season. Last year was a great feeling; I can’t wait to feel that again because we are not losing.”