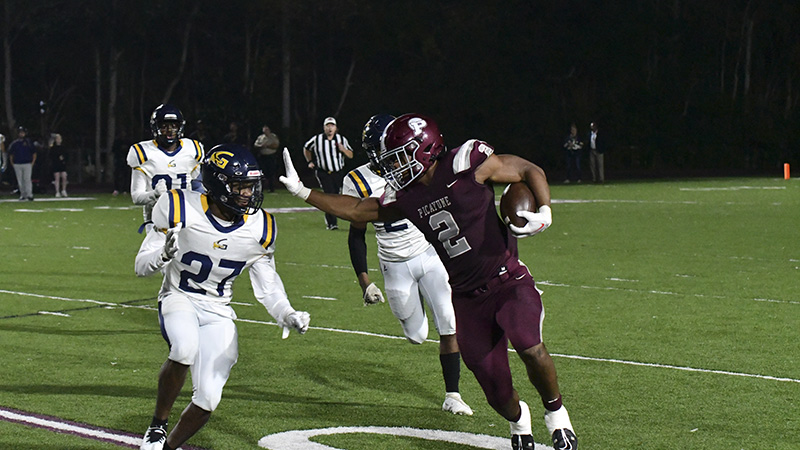 Picacyune's Dante Dowdell fights off Gautier defender for a first down in Picayune’s district championship win over the Gators. Photo by David Thornton Jr.

The Picayune Maroon Tide earns the 5A district champion after a 48-42 overtime win over the Gautier Gators. Friday night’s game was a high paced scoring frenzy. Neither team gave any ground nor it came down to a Dante Dowdell 10 yard rush in overtime seal the deal.

“It was two great teams getting at it, the thing is we can’t make mistakes, and I’m the one who made the ultimate mistake tonight I should of called a better game to put us in better position situation, but our guys reacted to it. We played 48 minutes plus some, they never gave up. I’m just so proud of our effort for the whole game,” said Head Coach Cody Stogner.

Both teams had a multitude of penalties, but Stogner said his game plan never changed and his team responded to adversity just they way they were taught.

“We always talk about it every week, ‘control the things we can control’, we can’t control those guys throwing those penalties and the thing is we can control how we reacted to it and play the next play. Ultimately that’s what we did. I like the way we reacted we didn’t let it get to us or let it get us down. That’s what you saw tonight,” he said.

The Gators received the ball first and gained an early 7-0 lead through eight plays covering 85 yards. Picayune responded in 12 plays covering 53 yards, tying the score at 7-7. Dowdell ran it in from one yard out with 2:02 to play.

In the following kick off, Gautier found an opening and almost returned the ball for a touchdown, but was tackled by kicker Morgan Craft. The Picayune defense ended on a high note. They gave up no ground and a Jamonte Waller sack of Gators Quarterback Kaden Irving ended the half.

Tied at 21-21, Picayune took its first lead after a Chris Davis goal line run. That drive covered 55 yards. The Gators tied the game at 28-28 after a single play reception covering 80 yards. After Picayune’s following drive ended without a touchdown, the Gators retook the lead at 35-28 with 1:32 remaining in the third.

In overtime, Picayune’s defense shut down the Gators in four plays. Picayune needed only one play to score. Dowdell broke several tackles on his way to his fourth touchdown of the night, sealing Picayune’s fate as district champions.

Robert Williams and Waller led the team in tackles with seven. Williams had six solo tackles, Waller had 3 sacks, Triston Cooper had two sacks and Jabari McWillams had one sack.

“We’re tough, I really don’t know how to explain it. A lot these kids have been in big games before and they know exactly what it takes. But it all goes back to how we prepared each week and our mindset is we got to go out and believe in everything we do and why we’re doing it…I’m just so proud of these guys, I can’t even say enough on how proud I am,” said Stogner.

With the win, and a perfect record on the season, Picayune has secured the No.1 seed in the 5A state championships. Their next opponent will be announced by MHSAA this Saturday.