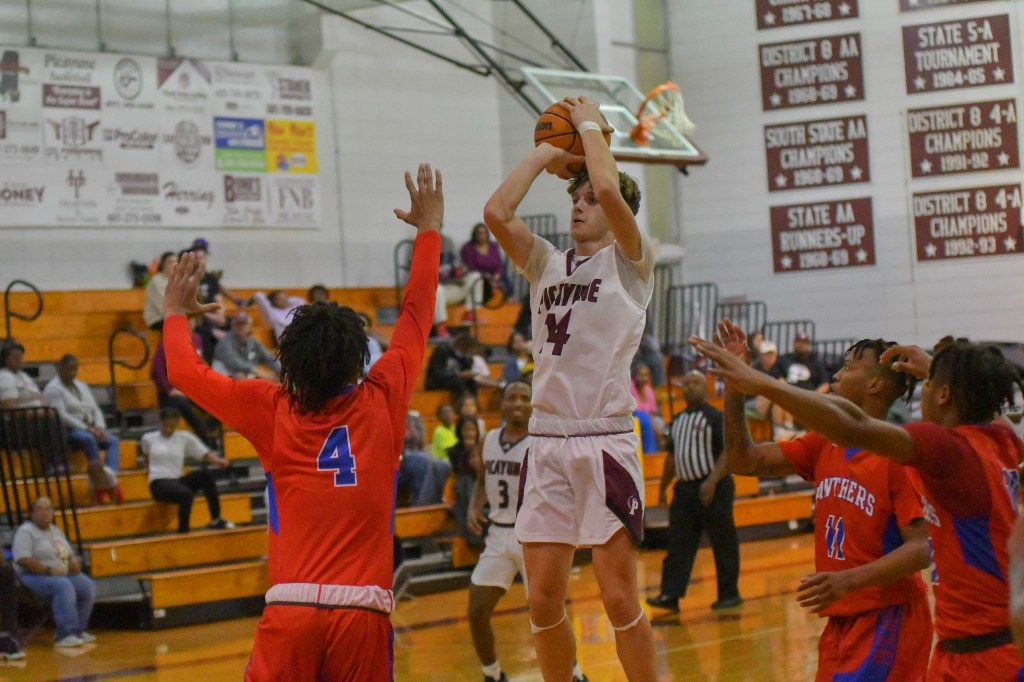 The Picayune Maroon Tide boys basketball team fell to 0-2 on the season after losing to the Pascagoula Panthers, 52-42. Picayune had a real challenge Tuesday night; Pascagoula is much bigger, athletic and a more physical team than Picayune right now. Picayune didn’t shoot well from the behind the arch and rebounds were heavily sided to Pascagoula.

Picayune is missing several key players who are currently on the football team, yet Head Coach Eric Vianney was pleased by how his current roster is competitive.

“I liked the fight, tonight we fought, and we battled…we’re down players. It’s part of the game but we need to get better regardless,” said Vianney.

Mid-way through the first quarter, Pascagoula took a 9-6 lead. Pascagoula’s success could be attributed to their full court press on Picayune the entire game. While Picayune handled the pressure for several series, the press also bit them for turnovers every now and then. The press helped Pascagoula gain a lead but Picayune figured it out for a while and tied the game at 11-11 after a Troy Carter three. Picayune amped up its half court pressure allowing Brunson Stockstill to steal a pass and score a coast-to-coast layup. Then Jahiem Everett scored a contested layup to push their lead to 15-11 with under a minute to play. Pascagoula went on a 4-point run to tie the game 15-15 at the end of the quarter. They hit a three at the top of the key, and scored 1-2 from the strike.

Out of the second quarter, Pascagoula grew a 22-16 lead. Picayune’s Brunson Stockstill was very active offensively during the game. His activity led to his first assist for a DaKeith Quinn layup. The quarter ended with Pascagoula up 24-18.

Both teams started the third quarter with back-to-back turnovers. Stockstill ended the drought after knocking down his second midrange jump shot of the night. Following that, Picayune broke the press for a layup and trailed only by 24-22. Pascagoula ended their drought with a three, and then Stockstill assisted a teammate for an and-one layup. With the score at 27-25, Pascagoula ran up the score to 31 points while Picayune’s score went up only by a single two-point shot.

The game tied 35-35 early in the fourth quarter. In that sequence Quinn had a layup, Everett assisted Josh Holmes for a three and Holmes hit another three to tie the game. Pascagoula converted the old fashion three-point play that gave them the lead. From there they went on an 8-4 point run. A Carter three marked the score at 50-42 with two minutes to play. Pascagoula hit two free-throws towards the end of the game to cap off the night.

Vianney said Picayune didn’t play smart especially when the opportunities presented themselves and Picayune couldn’t capitalize to control the lead. He also did not like the frequent turnovers they committed.

“I’m happy that at least we battled, competed and gave ourselves a shot,” he said.

Moving forward Picayune will work towards the second phase of beating a full court press, and establishing their half court offense.

“What’s the next step? That’s to make good decisions. Driving the ball, driving to make plays. It was not clean or clear (tonight), we did not execute that well,” he said.

Next, Picayune will be on the road to face the Gulfport Admirals Thursday, Nov 3 at 7 p.m.