Picayune fends off Laurel in first round 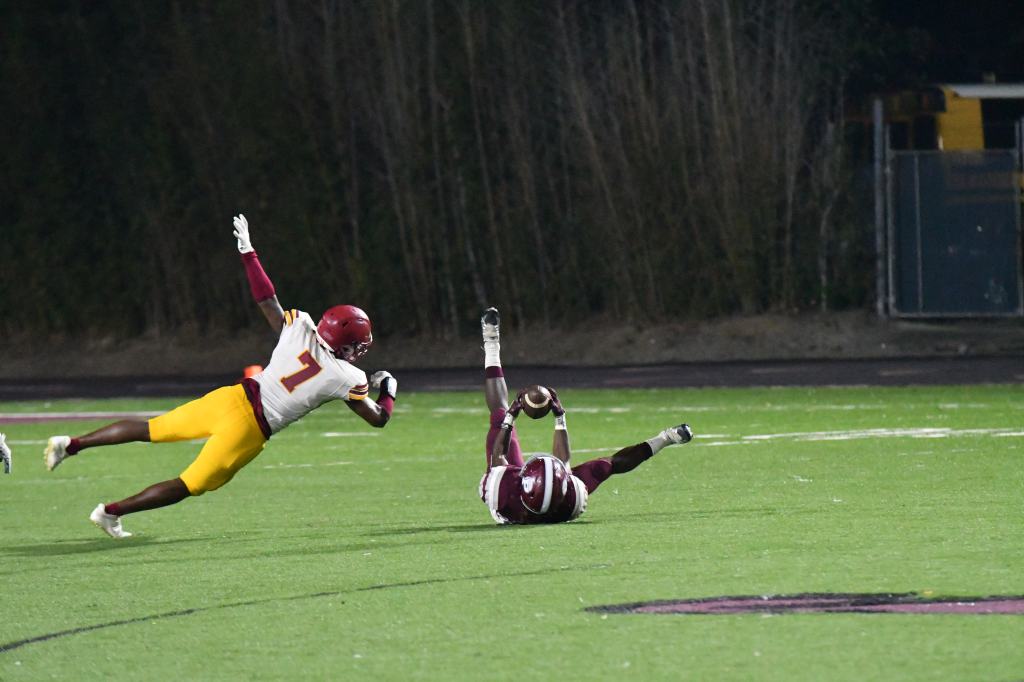 Amarion Tyson catches his on of his two interceptions on his back during Picayune’s win over Laurel.

“It was a hard fought game, defense did a great job of bailing our offence out a little bit. We were able to get things going after capitalizing off turnovers but all in all I thought it was a good game… our guys fought hard for 48 minutes and that’s exactly what we look for, I’m proud of the way everyone played tonight, proud of this coaching staff in getting these guys prepared. The good news is we get to go to work on Sunday and be back on this field Monday afternoon practicing,” said Head Coach Cody Stogner.

Picayune was first to score and it came off a 68 yard Darnell Smith rush. Picayune led 7-0 with 8:27 to play in the first quarter. In the second quarter, the Golden Tornadoes settled for a 27 yard FG. This made the score 7-3 with 7:01 left to play. Before the half ended, Picayune ran three plays in under a minute. With six seconds left, Brady Robertson threw a fade to Jessiah Contee in the endzone for a touchdown.

Picayune’s next scoring drive occurred 58 seconds before the end of the third quarter. It took them nine plays covering 53 yards. Mr. Football’s Dante Dowdell punched in a two-yard touchdown to end the drive and extend the led, 21-3.

Laurel finally scored a touchdown at the 7:46 mark of the fourth quarter. They concluded their 57-yard drive with a five-yard rush.

Picayune’s final scoring drive was capped off by a 27 yard FG by Morgan Craft. Picayune finished the game, 24-9.

The Maroon Tide defense had four interceptions this game. Amarion Tyson accounted for two, Nathan Hickman and Damarius Magee had one interception each.

Next, Picayune will host the winner of West Jones vs. Gautier on Friday, Nov. 11 at 7 p.m.

In terms of preparation, its business as usual and Stogner has no doubts on his player’s ability to prepare.

“It’s all about getting into the film room and getting it fixed, because I’m never going to doubt these kids effort, these kids aren’t normal, they’ve fought through adversity and I know that they’re going to be ready to work come Monday,” said Stogner.