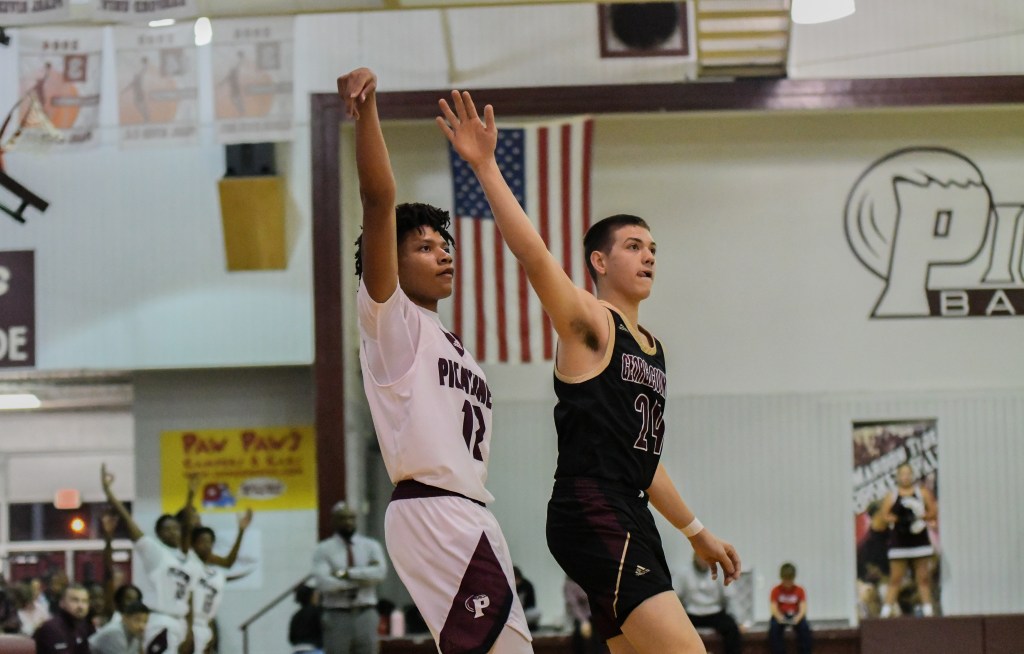 Troy Carter watches his shot go in as he heads for a 30 point performance during Picayune's 64-37 win over George County.

On Tuesday night the Picayune Maroon Tide boy’s basketball team rallied for its first win in four games. Their victory is labeled as a 64-37 blow out against the George County Rebels.

Troy Carter had a season high 30 points, Brunson Stockstill had 14 points and Dakeith Quinn had 10 points.

The Rebels got on the board first but back-to-back three-pointers by Carter gave picayune a 6-4 lead. Both teams traded buckets but with 1:10 remaining, Carter hit his fourth three-pointer for a 15-9 lead. Carter also ended the quarter converting an and-1 layup. After his made free-throw, Picayune led 18-9.

Picayune’s run still rolled strong as their lead increased to 29-13. The quarter ended with a George County layup followed by a Quinn three-pointer. At the half picayune led 35-17.

Picayune stunned the Rebels with a quick 6-0 run. In that sequence Carter hit a jumper, Josh Holmes made a floated and Jaden Hart had a layup. Both teams traded buckets but Picayune did great keeping their large lead. Before the quarter ended Sanchez Goss assisted Kamari Mark on a back door layup. This put Picayune up 49-30.

Picayune finished off the Rebels with a 15-7 point run. Carter and Stockstill contributed five points, and Quinn had four in this quarter.

Next, Picayune will be on the road to play Salman Spartans. Kick off is set for Thursday, Nov. 17 at 7:30 p.m. The Lady Maroon Tide, who also beat George County in the score of 49-30, will play at Biloxi the same day at 6 p.m.