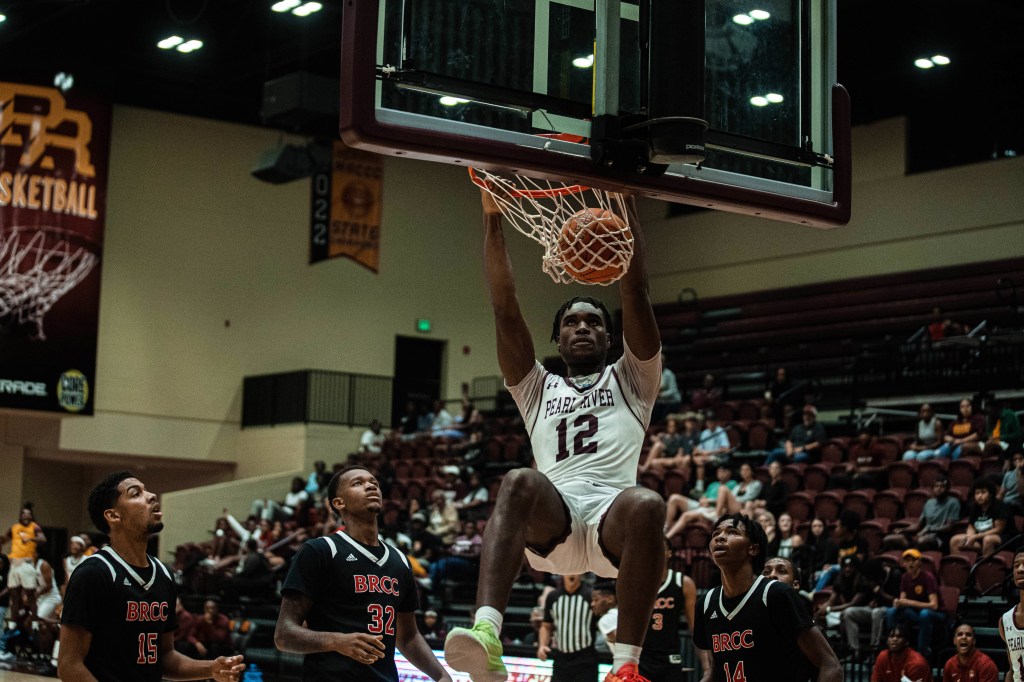 POPLARVILLE, Miss. — Despite getting off to a slow start Tuesday night inside Marvin R. White Coliseum, the No. 14 Pearl River men’s basketball team recovered to pick up a dominant 73-53 victory over Baton Rouge.

“We took a step in the right direction tonight. Baton Rouge has some guys who can make plays and they’re probably going to be a playoff team.”

Baton Rouge (2-1 overall) was off and running from the start, jumping out to a 5-0 lead.

Pearl River (3-1) switched the momentum shortly after. The Bears brought the ball up the court and tried to dish off inside. Jermahri Hill (Bessemer, Ala.; Berkmar) slapped the ball away, ran forward, and flicked it down the court. The freshman tracked down the loose ball and threw down a vicious slam to make the score 5-3.

The Wildcats cut the deficit to 9-8 soon after. Hill dribbled over to the left wing and found Carlous Williams (Hattiesburg; Harrison Central) cutting inside. The pass was perfect as Williams jumped and slammed the ball home with two hands.

Pearl River used an 8-0 run to propel itself ahead 19-14 a few minutes later. The run was led by a pair of 3-pointers from Cam Brown (Hattiesburg). On Brown’s second, Dylan Brumfield (Oak Grove) drove inside the lane before passing back out to Brown. The sophomore guard hesitated for a second then popped the shot.

Baton Rouge fought right back, going on a sizeable run to take a 20-22 lead.

With the Bears leading 33-29 just before the half, Kylan Baggett (Starkville) caught a pass on the right wing and knocked down a 3-pointer to send the Wildcats to the break with a 33-32 deficit.

Right as the second half started, Williams started to make his presence known. He opened the half by knocking down a contact layup to give the Wildcats a 34-33 lead. A few plays later, he knocked down a step-back jumper to tie things up 36-36.

The Bears briefly equalized at 38-38, but Williams promptly put Pearl River back up for good. Brown passed to the wide-open Williams in the corner. The Wildcat forward caught the pass and immediately knocked down a 3-pointer to make the score 41-38.

The Wildcats began to quickly pile it on as they grabbed a 55-42 lead midway through the half. Hill moved inside, drawing the defense in the process. Ayub Nurhussein (Hamilton, Ontario.; Toronto Basketball Academy) crashed inside, caught a pass from Hill and slammed it home.

Hill extended the lead to 57-45 with another big play. The freshman was standing at the top of the key looking for an opening. He found a gap, drove right down the heart of the BRCC defense and threw down a rim-rattling dunk.

Brumfield and Williams connected on an alley-oop as the clock started to wind down. Brumfield slowly brought the ball up the court while looking for options on the offensive side. Hill set up a screen to take away a pair of Bear defenders, leaving Williams wide-open for a massive two-handed slam off the Brumfield feed. The basket made the score 71-53.

Brumfield capped the scoring just a few moments later as he moved inside and picked up an easy layup. The Wildcats held off the Bears for the last few seconds to secure the 20-point 73-53 victory.

Williams led the team in points with 25. He also had four rebounds and two assists.

Hill had yet another remarkable game for the Wildcats, finishing with 19 points, eight rebounds and six assists.

Brown rounded out those in double-digits with 11. He also had two assists.

“He’s the perfect point guard for me,” Oney said. “He’s the son of the coach, so I know he’s heard all the messages a lot of times. I can never affect him. I get onto him, but he’s the ultimate next play guy.”

Pearl River returns to the court Thursday for a home matchup against William Carey Junior Varsity. Tipoff inside Marvin R. White Coliseum is set for 6 p.m.

Pearl River livestreams all home games for free at PRCCMedia.com/gold. Fans who have Roku, Amazon Fire, or Apple TV devices can also watch the Wildcat broadcasts by downloading the “Pearl River CC” channel from their app stores.
Games will also be available over the air in Pearl River County by tuning into 1320 AM and 106.9 FM. The radio broadcast is also available at WRJWRadio.com and by downloading the WRJW app.