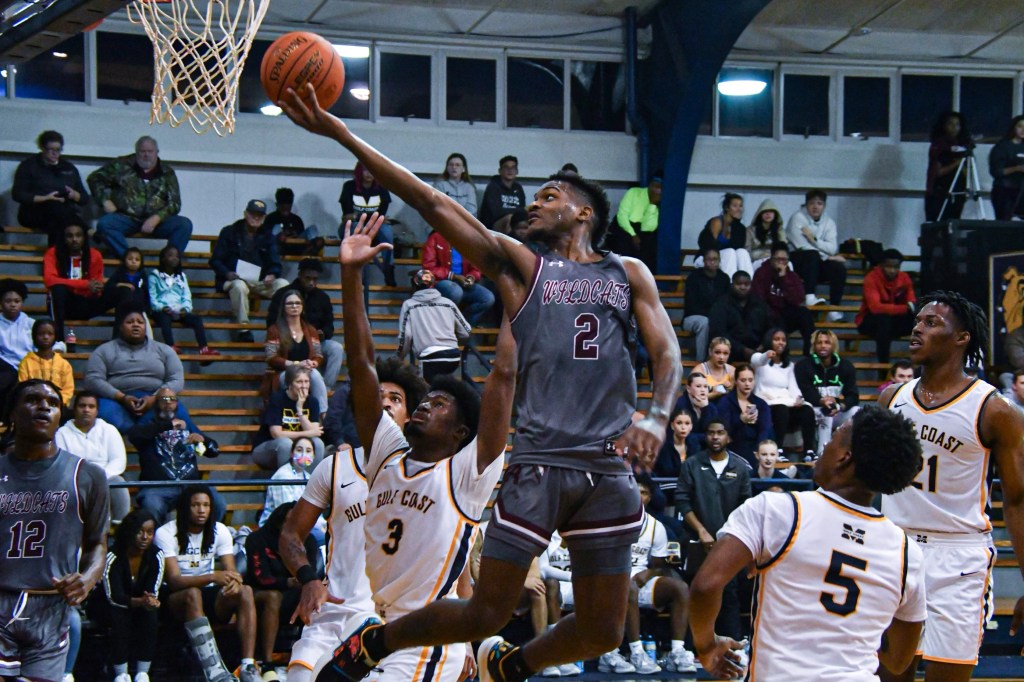 Jermahri Hill (Bessemer, Ala.; Berkmar) drives to the basket for a layup in Pearl River’s 71-68 victory over rival Gulf Coast. Hill finished the game with a team-high 17 points.

PERKINSTON, Miss. — The No. 10 Pearl River men’s basketball team learned first-hand that you can’t let up against your rivals. After leading by 15 points at halftime, the Wildcats had to scratch out a 71-68 victory at Gulf Coast on Monday night inside the Weathers/Wetzel Center.

“I don’t think some of our guys understand the focus that it takes to win in this conference,” head coach Chris Oney said. “We don’t have the luxury of getting the lead and teams just lay down. Everyone we play fights until the end like coach (Tim) Ryan’s guys did tonight.

“All in all, I’m happy for the win, but I am disappointed in some of the decisions that we made on the court. We’ve got a few things we’ve got to get better at.”

Pearl River (5-1 overall) took its first lead of the night with 15:06 remaining in the first half as Carlous Williams (Hattiesburg; Harrison Central) softly laid a ball off the glass and into the basket for a 4-3 lead.

Gulf Coast (2-4) battled back to take an 8-6 lead soon after, but then Cam Brown (Hattiesburg) struck from beyond the arc. The sophomore caught a pass on the left wing and promptly knocked down the 3-pointer to make it 9-8 Wildcats.

Just like it has done through the early portion of the season, the Dylan Brumfield (Oak Grove) and Williams connection struck moments later. Brown took the ball down the left side of the court before passing back to Brumfield.

While standing just in front of the midcourt logo, Brumfield lofted a pass to Williams who was dashing in from the right corner. Williams caught the pass and viciously slammed it home all in one motion to make it 13-8.

The Bulldogs didn’t go down quietly as they battled back to tie things up 15-15.

Jermahri Hill (Bessemer, Ala.; Berkmar) gave the Wildcats the lead a few seconds later as he picked up an easy layup. The basket gave PRCC a 17-15 lead.

PRCC pulled ahead by nine points at 29-20 with under eight minutes left in the half as Jakari Livingston (Pine Bluff, Ark.; Wilbur D. Mills) knocked down a 3-pointer from the corner.

The Wildcats continued to pour it on in the first half, going into the break with a 15-point, 39-24 lead over the Bulldogs.

The second half of the night couldn’t look any more different than the first half. Despite PRCC extending its lead on a Williams putback, Gulf Coast started to quickly claw back into the game.

MGCCC went on a massive run and cut the Pearl River lead to three points at 59-56. After a Brumfield basket, the Bulldogs knocked down a big 3-pointer to make the score 61-59.

It looked like the Wildcats had recovered the momentum after the next string of plays. Brumfield found Hill for an alley-oop slam and Williams followed it by getting a contact layup to fall. The baskets made the score 65-60.

Gulf Coast immediately fought back from that deficit to even things up 65-65.

PRCC went ahead by four points after Brumfield fought for an offensive rebound and got his putback attempt to fall, making the score 69-65.

The Wildcats went ahead 71-67 after Hill whipped a pass inside to Ayub Nurhussein (Hamilton, Ontario; Toronto Basketball Academy) for a layup, but MGCCC sliced the lead right back to two points at 71-68.

A Gulf Coast rebound and timeout gave the Bulldogs one final chance to tie things up with just 0.3 seconds remaining on the clock. The Bulldogs inbounded the ball, but the full-court heave didn’t have enough loft under it as it fell short for a Pearl River victory.

Hill continued his incredible start to his Wildcat career, leading the team in scoring with 17 points.

Brown and Brumfield rounded out those in double figures with 11 and 10 points, respectively.

The Wildcats hit the road Friday to compete in the Holmes Community College Bulldog Classic. PRCC will take on Lee College for a 5 p.m. tipoff. Before taking on Southern Arkansas Tech Saturday at 1 p.m.