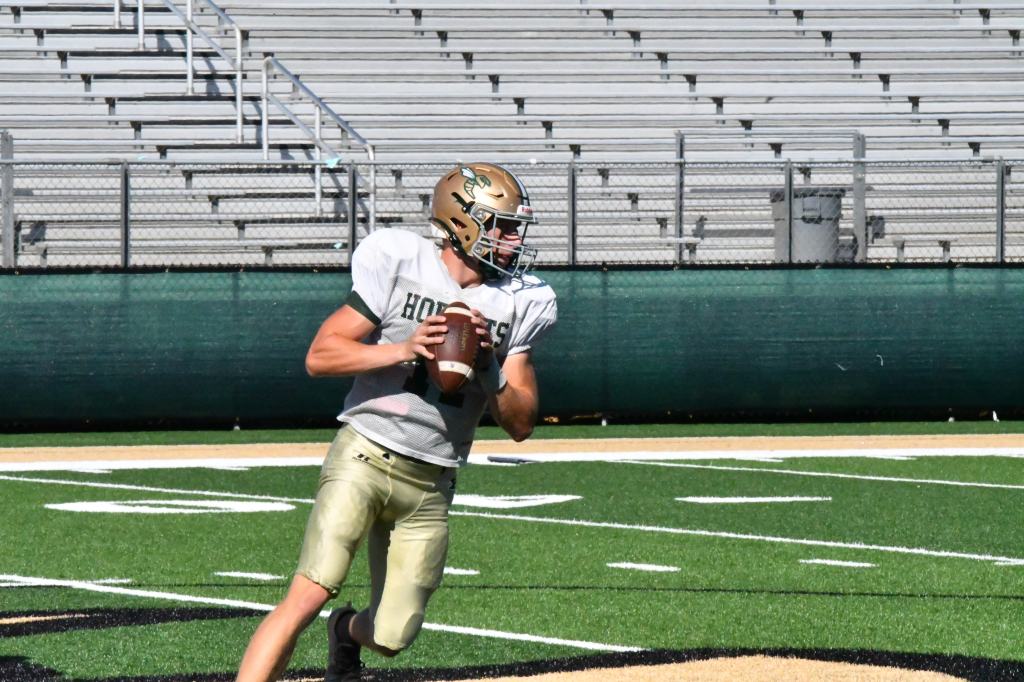 Senior captain and quarterback MattWill practices his out of pocket passing during Wednesdays practice.

The No. 1 seeded Poplarville Hornets will host the Pass Christian Pirates in the first round of the 4A State playoffs.

Kick off is set for Nov. 4 at 7 p.m. Poplarville beat the Pirates earlier in the season with a score of 42-7.

The Pirates show signs of a strong defense and tend to pass the ball. In their last contest with the Hornets, they threw the ball 37 times. Poplarville, that night, ran for 398 yards, the team’s highest total this season.

“We don’t really know what they will bring come Friday. I’m sure they’re going to mix it up a lot on us, we’re going to get their best shot. It’s win or go home, so we got to be ready to play,” Head Coach Jay Beech said.

On the defensive side, Beech has put his faith in his Defensive Coordinator Jacob Aycock and his staff.

“They put together a great plan every week. I’ll be honest I’m not too involved with the plan because I trust those guys to do a great job. Our defense is sound, solid. They love to hit every Friday and force a lot of turnovers,” Beech said.

Beach said the Hornets have yet to be tested in the fourth quarter and are aware that it might happen this week. They’ve shut out all but two teams this season in the first two quarters. Picayune and Columbia was Poplarville’s only test. When they played Columbia they shined under pressure down 12-0 in the third and come back to win 20-18.

Captain and senior quarterback Matt Will said that game was huge because everyone looked confident.

“I never saw our team panic even when we were down 12-0, I felt it was a big come back win even though things weren’t going our way,” he said.

Will has played varsity for three years and enjoyed each team but this energy of this year’s squad and the maturity is building week by week.

“Most team’s (energy) by this point would be done, but we can see the light at the end of the tunnel with our goals in mind. This team is so ready to go out and prove themselves and it’s been awesome,” said Will.

Will said the Hornets are clicking more as a unit and at this point everyone is focused on the task at hand.

Will said he and the rest of the senior class hold a sense of responsibility in regards to leading and reminding the team of their goals.

“There are a lot of guys, not just me who are big leaders on this team,” said Will.

Will said he wants to earn a place in Poplarville football history and be a part the Coach Beech state championship era that finally reached the pinnacle set by the past Hornet football generations.

On the ground, Poplarville rushed for 369 carries for a total of 3,092 yards. Picayune averages 309 yards per game and they’ve seen the end zone 46 times this season. The Pirates rushed for 979 yards on 178 carries and 13 touchdowns. They average 108 yards per game.

Poplarville has racked up 3,696 all-purpose yards, while the Pirates have 2,793 yards.