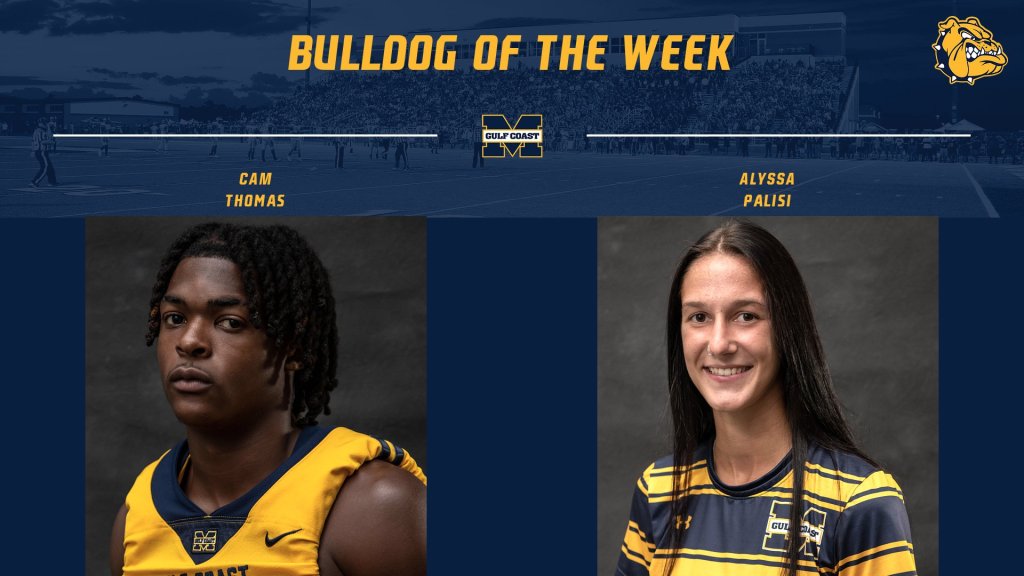 PERKINSTON — Cam Thomas and Alyssa Palisi have been named Bulldogs of the Week for Oct. 24-30.

Thomas, a sophomore running back from Picayune, ran 33 times for 191 yards in Gulf Coast 38-24 win over No. 4 Jones that clinched the MACCC South title. He averaged nearly 6 yards a carry and scored on a 21-yard run that tied the game at 24 in the third quarter.

Alyssa Palisi, a sophomore forward from Diamondhead, scored both Gulf Coast goals in a 2-1 win over Southwest in the final game of the season.

Ivan Gonzalez, a sophomore midfielder from Olive Branch, returned to the lineup and led Gulf Coast to a pair of big wins with a goal and four assists. He had two assists in a 6-0 win over Southwest Mississippi to close out the regular season and clinch a home playoff game. In that NJCAA Gulf District quarterfinal, he played a part in all the Bulldogs’ goals in a 4-1 win over Itawamba. He scored one, assisted on two and drew the penalty for the other.

Gabe Showalter, a freshman kicker/punter from St. Martin, made all five of his point-afters and his only field goal attempt against Jones. He had two more touchbacks.

Jervin Smith, a sophomore defensive back from Columbus, had seven tackles against Jones. He also had a fumble recovery and assisted on a tackle for loss. The Bulldogs shut out the Bobcats in the second half, holding them to 55 total yards.