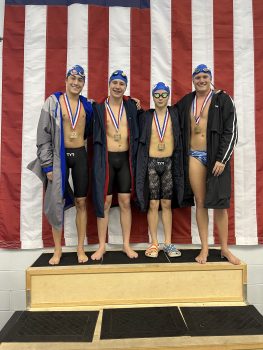 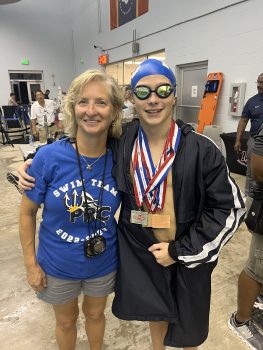 Picayune’s Addison Taggard, Lauren Stevenson, Victoria Vloedman and Heidi Hill placed 6th in the 200 Medley relay with a time of 2:16.92. Morgan Craft, Parker Helton, Ryder Burge and Ian Herring placed 8th in the 200 Freestyle relay with the time of 1:48.77.

The boys took gold in the 200 freestyle relay. The team included Austin Woods, Zak Kennedy, Jared Bryson and Wyatt Waltman. They also clocked in a new state record at 1:32.58. The girls finished 7th in the same event. PRC’s Kaelynn Malley, Maelin Harvey, Adaline Albritton and Shalynn Lee placed 4th in the girls 200 medley relay with the time of 2:14.12. The boys also placed 4th in this event with a time of 1:47.72. Those swimmers included Jake Rogers, Woods, Bryson and Waltman. The boy’s finished second in the 400 freestyle relay and the girls placed 7th in the same event.

“The best part is that they are a team and a family. They encourage each other and are there for each other for the good and the bad. Doesn’t matter what grade they are in or how well they swim, all are equal in their eyes. They helped each other with stroke technique and were right there cheering at every meet. When the relay won gold and broke the record you would have thought the whole team won gold. They are an awesome group of swimmers. Could not be more proud of them. The win is great, but the journey, emotionally and spiritually, to get there is just as important ” said Pearl River Central Head Coach Beverly Griffing.