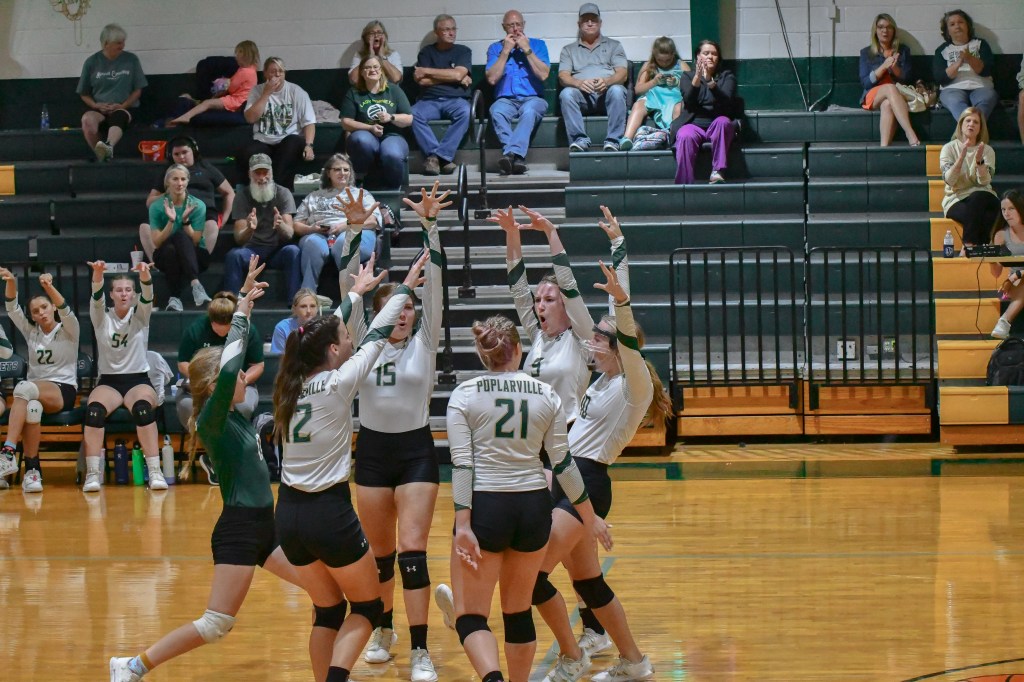 Lady Hornets players celebrate a scoring rally in Poplarville’s win over the Lanier Bulldogs during round one the 4A state championships.

The Poplarville Lady Hornets volleyball team’s season came to an end on Tuesday night when the team lost in five sets to the West Lauderdale Knights during the second round of the 4A State Championships.

Head Coach Amanda Ladner said it was hard fought game, but what led the Lady Hornets to trail the first two sets was their timid offensive play.

She said their attacks were merely tips rather than spikes.

In the third and fourth sets the Hornets became more aggressive and began putting the ball down hard with hits, which gave them stable rhythm on offense.

“We did a lot of tipping, just kind of not putting enough power behind our swings. We decided if we’re going to do this we’re going to go hard or go home,” said Ladner. “We started swinging a little bit harder which got us a few kills. It put momentum back into our game.”

In the final set Poplarville was still attacking strong but not as strong as the Knights.

They gained an early 4-0 lead that was hard to close for the Lady Hornets. They eventually lost the fifth set 15-10.

“We needed to go a little bit harder against the other team instead of playing passive, we needed to play a little aggressive and we did and it made a huge difference. Unfortunately in the end we couldn’t pull it out,” said Ladner.

Lendy Crider led the team in kills with 13 and Rayelin Davis had eight.

Poplarville finished their season second in district with a 7-2 record and 13-7 overall in the regular season.

The team will lose seniors Sarah Bolin, Rayelin Davis and Caroline Pharse in the 2023-24 season.

Ladner said she could always count of those girls to never give up, and the younger girls fed of that all season.

They were always on time and were the first in they gym and the last to leave the gym.

“They don’t give up their attitude, we would get down in games but they would keep fighting and I think that’s how they left their impact,” said Ladner. “It’s going to hurt not having them but they left a impact on the younger girls. And those shoes will get filled because they (Bolin, Davis and Pharse) did a great job leading their team this year.”