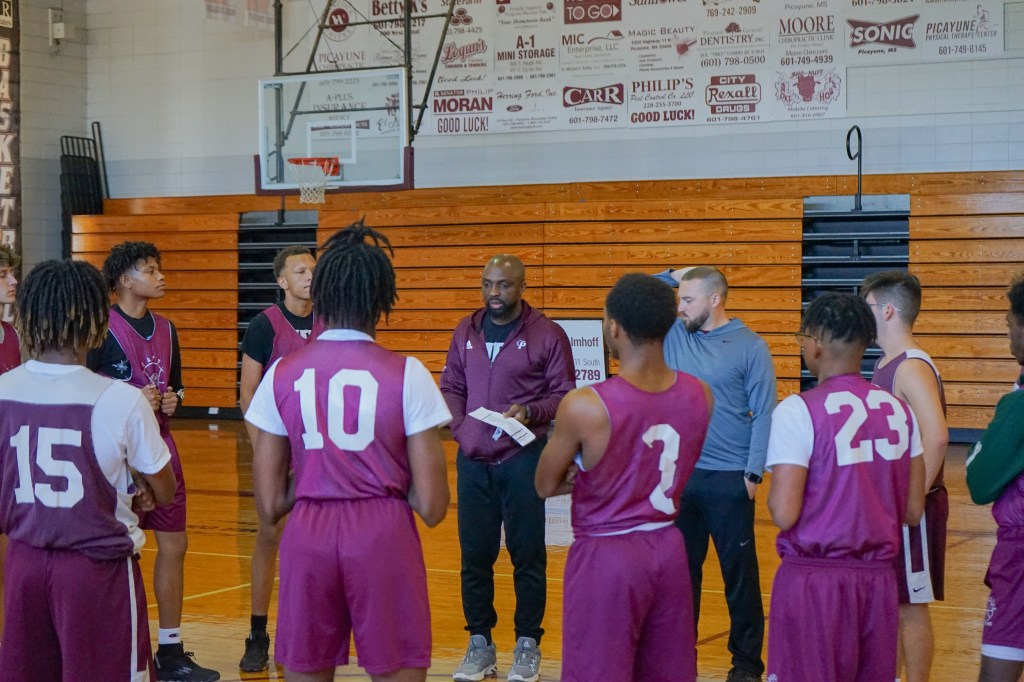 Head Coach Eric Vianney addresses the Maroon Tide basketball team about discipline on and off the court before practice earlier this week.

Picayune boys basketball will start from scratch to work toward another final four appearance.

“We want to go back again, it really hurt last year that we lost. But we’re going to be hungry to win.” said junior forward Dakeith Quinn.

Picayune concluded the 2021-22 season 19-8 overall, making it all the way to the Final Four 5A State Championship. During that year Picayune won their district, and four players: Issac Brice, Jaylen Martin, Troy Carter and Josh Holmes earned all-district accolades.

The success Picayune earned last season won’t be easily obtained this year. Picayune won’t have their rim protector Brice and floor general Martin with them, who were the hearts of the team. As a result there are a lot of new faces, new challenges and new opportunities for Picayune.

Picayune has been training to build their strength, focus, conditioning and skill level for this upcoming season. Defense will also be amped up because without their 6’7 all district defender, Picayune will be smaller on defense. They’ll need extra effort to guard, get stops and run in transition. Head Coach Eric Vianney said Picayune will still be a fast-paced transition team. The offense will be built on pace, driving to the basket and finding open shooters.

“We love to play fast so we try to prepare ourselves to do that,” he said.

The season is a couple weeks away Vianney says they are nowhere near where they need to be right now. He said their previous scrimmage was not a pretty picture.

But he also said this is a opportunity for his players to grow, learn about their abilities and find out who’s ready to step up.

“You live in a house where your older brother would clean after you and take care of the little chores. But when he’s gone off to college, somebody’s got to pick up the chores. That is the same situation that we are in right now. Somebody’s got to do it. But right now we are far from that,” said Vianney.

Vianney made it clear in pre-season that the players who get it and catch on quick will play. Before Picayune can get utilize their transition offense, they need stops on defense. Every year Vianney reviews the new players as he looks for the ones who will guard, understand assignments and make the correct defensive rotation. So far it’s a growing process.

“Some are going to improve, some may take a little while, the ones that are ready will play,” said Vianney.

Vianney wants to win district in back-to-back years, win as many games as possible and achieve their ultimate goal of winning a championship.

Junior forward Dakeith Quinn and Senior guard Josh Holmes will be the new heart of the team. Their motivation this season is reaching the final four, after falling to the New Hope Trojans.

With pivotal roles being vacant, Quinn wants to occupy the open big man spot. He said he’s worked on his ball handling so he can stretch further out on the floor and be an offensive threat

Holmes said this about his open opportunity.

“I’m taking advantage of it, just giving it all I got then going out there and playing basketball.”

Even though the team will be new, Quinn and Holmes say Picayune fans can still expect lit and fun games.

“We are pushing the defense up and you’ll see us playing harder,” Holmes added.

When asked where they want to be defensively amongst other Mississippi schools, both agreed they need to be the best defensive team in the state.

Picayune’s first game will be on Oct. 29, where they will play in the Tip Off Gulfport Classic in Gulfport.