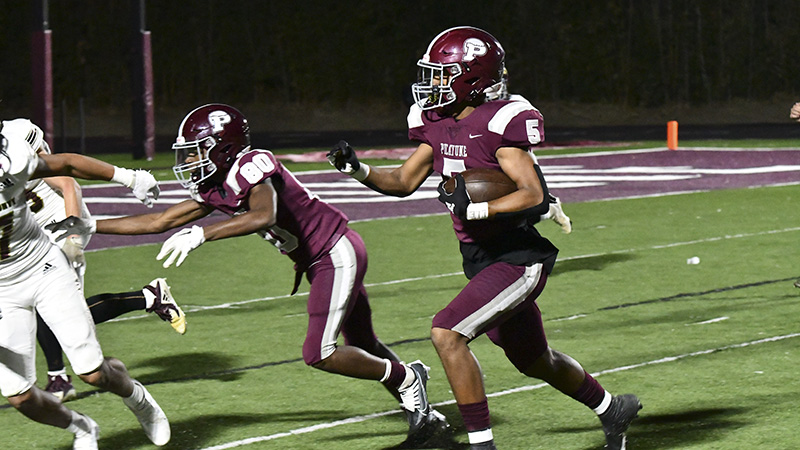 Niquis Ratcliff carries the ball for a Maroon Tide touchdown against the Rebels Friday night. Photo by David Thornton Jr.

No.4 Picayune Maroon Tide added another win to their record after stomping the George County Rebels 56-7 Friday night.

The Maroon Tide defense accounted for eight of the team’s 56 total points.

The Rebels received the ball to open the game but Picayune crossed the end zone first. The Maroon Tide defense did an amazing job pushing the Rebels back to the one yard line. On third down Jamonte Waller picked up a sack in the end zone for a safety. This gave Picayune the lead at 2-0 with 9:53 to go.

Picayune’s first offensive drive was set up on the 40 yard line.

In six plays Picayune found the end zone thanks to a Chris Davis 16 yard rush. After Morgan Craft’s PAT, Picayune’s lead increased to 9-0 with 7:25 to play.

The Rebels offense responded in a flash. In one play, Brandon Gautier rushed for an 80-yard touchdown. Their successfully placed PAT put them within two points at 9-7. But that would be the end of any Rebels offense success after Picayune scored 47 unanswered points.

Picayune’s second touchdown came 36 seconds before the quarter’s end. Picayune set up shop on the 15-yard line and Dante Dowdell began the drive, rushing for 18 yards. Two plays later Davis picked up a big first down and Picayune was placed on their own 42-yard line. Quarterback Brady Robertson completed a pas to Darrel Smith for a 37-yard touchdown but it was called back due to a Maroon Tide’s offsides penalty. Picayune was pushed to a second and very long. They managed to get a third and one thanks to Dowdell. He ran hard again and picked up seven yards for a first down. With the ball on the 26-yard line Dowdell’s rush was stopped inside the goal-line. Smith capped off the drive with an 8 yard rush. Picayune then led 15-7.

Their third touchdown occurred early in the second quarter. After the Maroon Tide defense three and out the Rebels, Robertson and company set up shop on their own 46. This time it only took the offense four plays to score. Smith received the hand off on a reverse and ran it 16 yards for a touchdown. Picayune then led 21-7 after a muffled field goal snap.

Picayune’s fourth touchdown was packaged in seven plays covering 73 yards. Dowdell capped off the drive with a two-yard rush. During this drive Robertson completed a 27-yard over the shoulder pass to Jessiah Contee. Two plays later Dowdell scored that touchdown. Picayune’s lead grew 28-7 with 3:18 before halftime.

Picayune’s fifth touch down was another defensive score. This time Contee intercepted the Rebels’ pass and ran it 40 plus yards for a touchdown. Picayune then led 35-7 with 90 seconds before halftime.

Picayune’s sixth touchdown occurred just one minute in the third quarter. In three plays covering 62 yards Robertson quarterback carried in a one yard touchdown. The lead grew to 42-7.

Picayune’s seventh touchdown came in four plays covering 60-yards. Picayune was in another goal line situation and Niquis Ratcliff was called on to rush for a one yard score. This gave Picayune a 49-7 lead with 5:23 in the third quarter.

Picayune’s eighth and final touch down drive became a reality after a Caleb Simmons forced a fumble and Picayune recovered. Picayune set up shop on the 40-yard line and it only took them two plays to score. Smith capped of the night with a rushing touchdown concluding scoring on the night at 56-7.

The First half of the game was what Cody Stogner would call sloppy. It wasn’t true Maroon Tide football in some parts but the pieces eventually came together for Picayune due to effort.

“The first half was like a roller coaster ride, we were trending up with good things then we’d do a few bad things, very uncharacteristic of us, but a lot of it was just effort, and that’s one thing we can control,” said Stogner.

Stonger said he was proud of his guys in how they responded coming out of the halftime.

“They listened to coaching, took coaching well and kicked it into gear the last 24 minutes,” he said.

Picayune remained undefeated at 9-0. They will be on the road to play the Long Beach Bearcats Friday, Oct, 28. 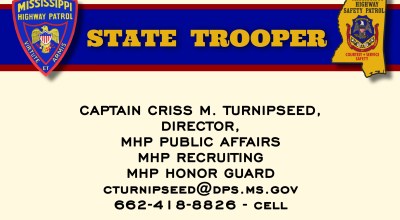