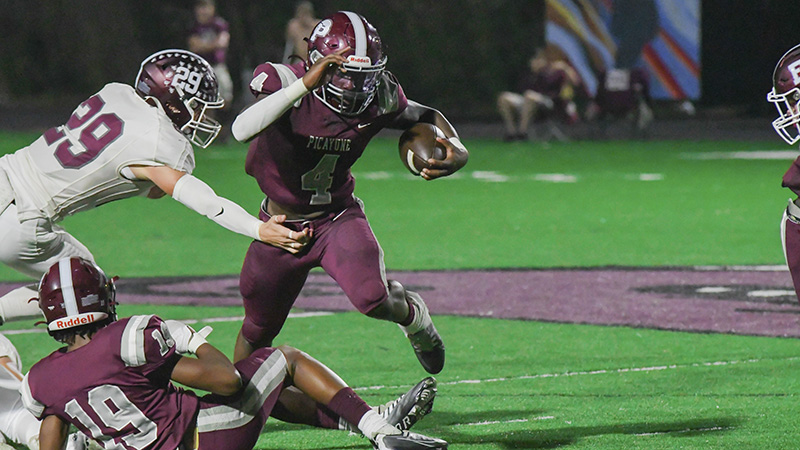 “That team’s a good team… we knew coming into the game it was going to be about our effort,” said Picayune Head coach Cody Stogner.

Picayune was without the team’s starting quarterback, Brady Robertson, who is out due to an injury. Darrell Smith was in as quarterback and ran for two touchdowns and completed one pass.

The Hornets received the ball to start the quarter but after six plays East Central fumbled the ball and Picayune recovered it on their own 42-yard line.

Picayune’s possession after the fumble recovery was an empty one.

East Central’s next possession concluded in a touchdown. It took them eight plays covering 58-yards that ended with a converted 35-yard touchdown pass on fourth and long. The touchdown gave them the lead at 7-0 with 2:32 left in the first quarter.

Picayune’s offense responded on the first play of their drive when Dante Dowdell ran it 60-yards for Maroon Tide’s first touchdown. Morgan Craft knocked in the PAT to tie the game 7-7 with 1:49 to play.

In the second quarter, East Central broke the tie with a 30-yard field goal. The entire drive was a penalty fest. Before the added three points, Picayune’s defense was caught offsides putting East Central with a manageable fourth and three. As East Central was attempting pick up the first down, they were called for delay of game, pushing them back to fourth and long. So they settled with a field goal.

With under a minute to play before halftime and Picayune’s ball on their own 40-yard line, Darrell Smith faked the hand off to Dowdell and ran it 60 yards to the house. After Craft’s PAT, Picayune took their first lead of the night into halftime at 14-10.

In the third quarter East Central took a risk and went for the onside kick. They recovered it back, giving their offense good field positioning. Their offensive drive didn’t result in anything other than a three and out. Jamonte Waller caused a huge tackle for loss during the Hornets second down play. East Central eventually punted the ball away and Picayune began their drive on their own 14-yard line. Picayune, too, was forced into a three and out and punted the ball right back to East Central. East Central went for it on fourth and six with a pass play but safety Damarius Magee broke up that pass.

Picayune set up shop on their own 33-yard line and in five plays saw the end zone. Chris Davis capped off the drive with a 11 yard rush. Picayune’s lead grew to 21-10 with 2:37 left in the third quarter.

East Central following offensive sequence was stopped on third down thanks to a Robert Williams sack.

Picayune took possession into the fourth quarter. They fell one yard short of a touchdown on fourth down and was forced to turn the ball over. With East Central’s back to Picayune’s endonze they threw the ball on third and seven and Magee picked off East Central quarterback Andrew Marble’s pass.

Picayune set up their offensive drive in good field possession. The Maroon Tide offense rewarded their Maroon Tides great defense by adding the icing on the cake. In just a few plays Smith ran it 32-yards for the Maroon Tide final touchdown of the night.

With a new face at quarterback, Stogner had full confidence in Smith to get the job done.

“He’s just a tremendous athlete, he’s been running some quarterback for us in JV games… it wasn’t really a strange thing to him but we had to call on him this week to step into the role for Brady. And man I can’t say enough on the job he did tonight, he did exactly and everything we asked of him. Big time players make big time plays in games and that’s what he does,” said Stogner.

This win moves Picayune to 7-0 this season.