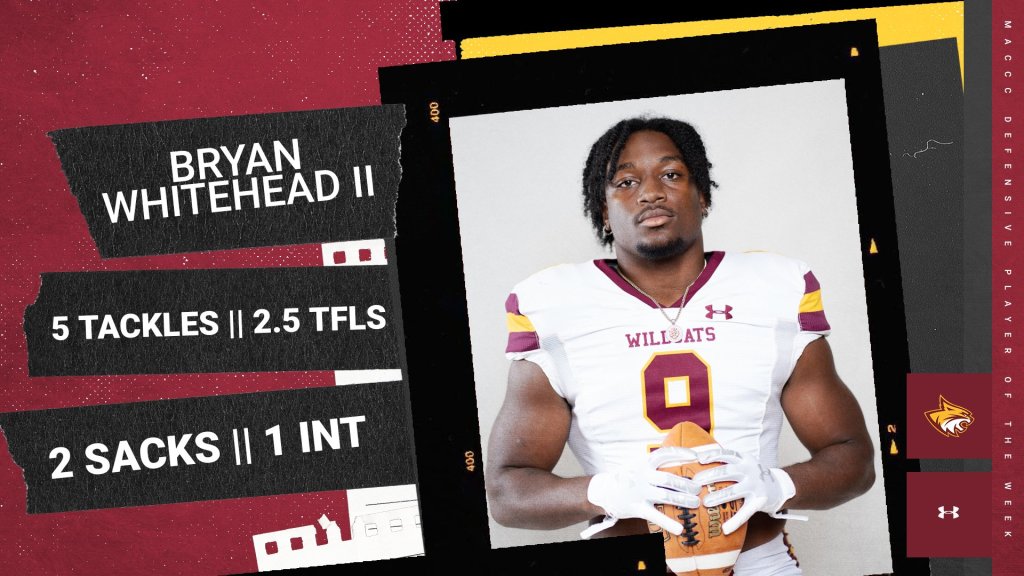 POPLARVILLE, Miss. — Pearl River football’s Bryan Whitehead II (Bartlett, Tenn.) has been named the Mississippi Association of Community Colleges Conference Defensive Player of the Week after a dominant performance last week. The award is the first of the season for a Wildcat football player.

Whitehead II has been a one-man wrecking crew all year long and continued that trend last week against rival and then fifth-ranked Jones College.

The defensive lineman helped hold the Bobcats to their lowest point total all season in the 16-10 loss. The sophomore finished the contest with five tackles, 2.5 tackles-for-loss, two sacks and one interception.

Whitehead II has had an unbelievable showing through Pearl River’s first six games of the season. Heading into Thursday’s homecoming game against Copiah-Lincoln, he has 30 tackles, 14 TFLs, 8.5 sacks, two forced fumbles, two fumble recoveries, one interception and two defensive touchdowns. His TFL and sack totals are fourth and second in the NJCAA, respectively.

Pearl River returns to Dobie Holden Stadium Thursday for its homecoming game against Copiah-Lincoln. The homecoming festivities will begin at 6:30 p.m. with kickoff set for 7 p.m. Fans are encouraged to show up early for the homecoming parade that starts at 5:15 and the Wildcat walk at 5:30.

Pearl River livestreams all games for free at PRCCMedia.com/gold. Fans who have Roku, Amazon Fire, or Apple TV devices can also watch the Wildcat broadcasts by downloading the “Pearl River CC” channel from their app stores.
Games will also be available over the air in Pearl River County by tuning into 1320 AM and 106.9 FM. The radio broadcast is also available at WRJWRadio.com and by downloading the WRJW app.

Advance single-game tickets for football are $8, or $11 at the box office. Single-game chairback seats are $20.
All-sport passes are available for $123. The passes include general admission to all PRCC regular season competitions.