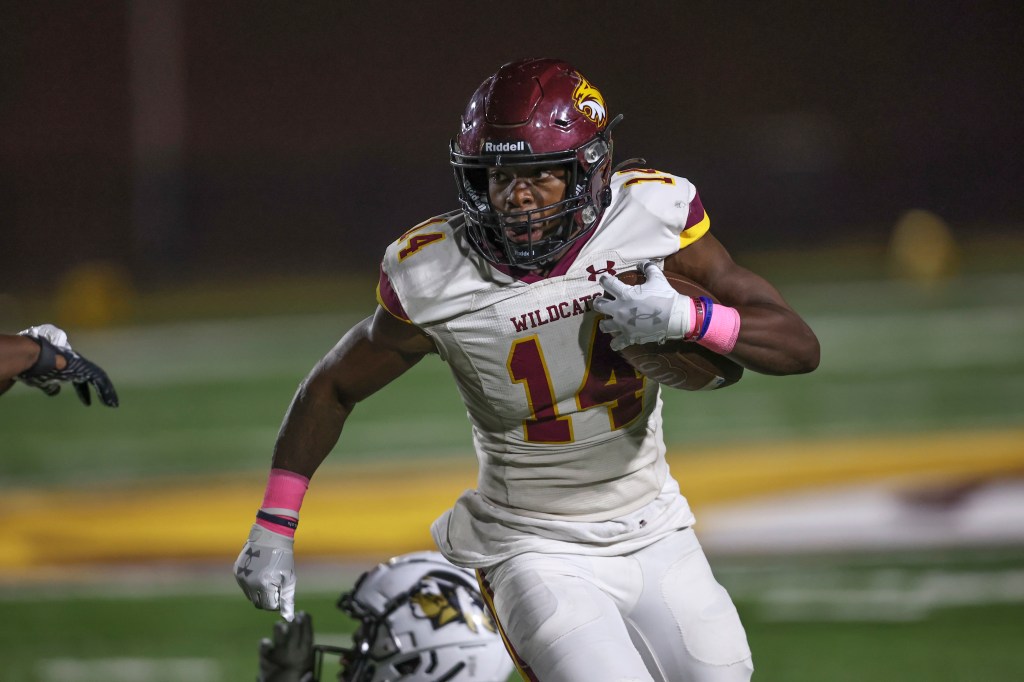 POPLARVILLE, Miss. — Pearl River football coach Seth Smith took a leap and moved to Poplarville just a few short years ago to inherit a program that had experienced a string of down years. Three seasons later, the Wildcats’ hard work has started to pay off. Thursday the Wildcats accomplished something that hadn’t been done in 12 years, earning their first six-win season by way of a 23-7 win over East Central.

“I am extremely grateful but what an exhausting season it has been,” Smith said. “This is no easy task, but I’m extremely lucky to work with great kids and great coaches. This is the first time since 2010 that we have won six games. I’m just a little part of this puzzle, so much credit needs to be given to our players and coaches.”

After the game, Smith talked about his amazing group of sophomores who were honored prior to the game.

“These guys have put in so much work,” he said. “We will have a huge signing class that goes on to play at the next level. We have a lot of power-5 guys. Tonight’s win wasn’t pretty, but it’s another reflection of their resolve.”

With the win, the Wildcats were poised to make their first playoff appearance since 2008, however, rival Gulf Coast upset Jones College 38-24 to leapfrog PRCC and claim the MACCC South Division Title.

Pearl River (6-3 overall; 4-2) was firing on all cylinders on the first drive of the night. Lawson Pratt (Tuscaloosa, Ala.; American Christian Academy) rolled out to his right but didn’t like his options up the field, scrambling for 16 yards. After a short gain on a touch pass, the Wildcats called a designed run for Pratt who bounced outside and carried the ball 32 yards up the left side of the field. A 13-yard connection between Pratt and Marquis McCoy (Crestview, Fla.) set up a 9-yard rushing touchdown for Nick Milsap (Raleigh; Oak Grove) that made the score 7-0.

A few drives later, ECCC began moving the ball down the field but Freddie Byrd III (Woodville; Wilkinson County) reacted quickly to pluck a pass away for an interception.

Following the turnover, the Pearl River offense methodically worked its way deep into Warrior territory. Facing a third and goal situation from the 8-yard line, Jordan Coleman (Hattiesburg; Oak Grove) ran a fade route to the back left of the endzone. Pratt lobbed a pass up and Coleman jumped high to make the catch over the opposing cornerback to extend the lead to 14-0.

Pearl River added to lead to 21-0 early in the third quarter, largely off the back of Qavonte Swanigan (Foxworth; West Marion). The running back carried the ball six times for 55 yards to get into East Central territory. A few plays later, Pratt’s pass attempt to Foushee resulted in a pass interference call, moving the Wildcats inside the Warrior 5-yard line. Milsap eventually punched the ball in for a 3-yard touchdown.

On the ensuing Michael Owens (Hattiesburg; Oak Grove) kickoff, the East Central returner slipped down at the ECCC (1-7; 0-5) 4-yard line. Two plays later, the Warrior quarterback was wrapped up by Marquez Tatum (Mobile, Ala.; LeFlore) inside the endzone. He attempted to throw a pass but there was no receiver in the area, resulting in a penalty for intentional grounding and a safety. The play made the score 23-0.

The Warriors finally sliced into the Pearl River lead with 8:08 remaining in the game, using a 5-yard rushing touchdown to make the score 23-7.

Pearl River ran the clock out soon after to secure the 6-3 season.

Swanigan led the way rushing, averaging a whopping 8.7 yards per attempt. The sophomore ran for 104 yards on 12 attempts. Milsap finished with 50 yards and two scores on 15 carries.

Eli Hackbarth (Birmingham, Ala.; Oak Mountain) was second on the team with 11 tackles.