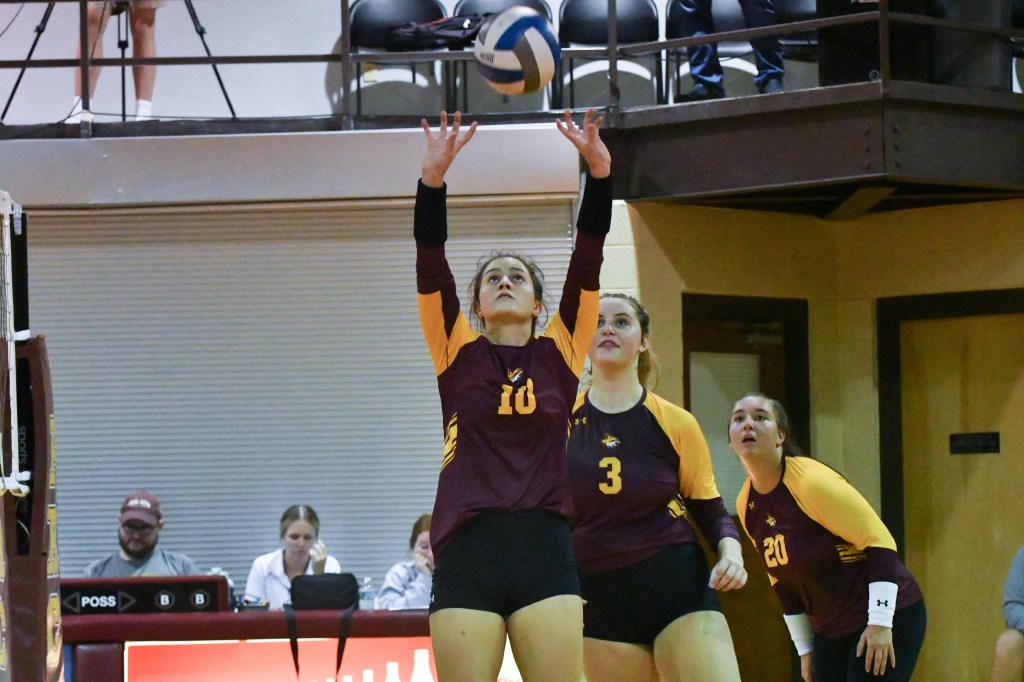 POPLARVILLE, Miss. — The Pearl River volleyball team returned home Tuesday to take on Belhaven. The match came just three days after a five-set match against Louisiana Christian, but the Wildcats did not let that affect them. After falling in the first two sets, Pearl River grabbed the next three to win the match 3-2 (26-28, 25-20, 25-19, 25-14, 15-6).

“I am so proud of them,” head coach Haley Chatham said. “I love that a bump-in-the-road match that went all five sets Saturday didn’t deter them a bit especially playing another full five-set match three days later.”

Chatham commented on how the previous matchup against the Blazers played into effect tonight.

“Considering we were swept by Belhaven last time we played them, this is a huge testament to the growth they have worked on and are showing lately,” she said. “We were also thankful for such a great crowd in Shivers tonight because it makes it so much fun and gives us a much-needed edge.”

Belhaven (5-12 overall) got things started in set one by opening up on a 4-0 run. The Wildcats (15-9) were able to respond shortly after through a Sammie Smith (Biloxi; D’Iberville) kill to cut the deficit 4-1.

From there, teams began to exchange scores, with Pearl River slowly cutting into the deficit with the score settling at 12-12.

The Blazers regained momentum and the lead, pushing the score to 22-20.

Pearl River tied things at 22-22 courtesy of a Julianah Overstreet (Vancleave) kill that was followed by a massive block by Anna Claire Sheffield (Canton; Jackson Academy) and Jasmine Burdine (Biloxi).

The Blazers outlasted the Wildcats, taking set one 28-26.

Belhaven again opened the scoring to start set two 2-0. After another Smith kill cut the deficit 2-1, The Blazers went on a big run to extend their early lead to 10-3.

The Wildcats did not let the large deficit deter them and proceeded to chip away, working things back to a 14-11 score line.

Belhaven again went on another large run, increasing the lead to 21-14. The Wildcats began to claw their way back into things again, but the rally fell short 25-20.

Pearl River opened the scoring in set three and set the tone early with a 5-0 run propelled by an impressive service run by Jolee Gibson (Brandon) that included two aces and she also added a block.

After a quick Blazer response, The Wildcats found momentum through another run and extended the lead to 7-2.

Shortly after, the lead was again extended through another run to 19-9. Belhaven found momentum late, bringing the deficit to within four at 23-19, but the Wildcats held on for a 25-19 set three victory.

Gibson again served the Wildcats out to a big early lead to start set four and added three straight aces to make the score 7-0.

From there, the teams began to exchange scores with the Wildcats able to hold on to the lead 15-5.

Pearl River did not look back and took set four 25-14 to force a winner to take all set five.

Pearl River used all the momentum it had gained in the previous two sets to start set five with a 7-2 run, this time through a service run by Natalie Bartholomew (Brandon).

Allison Carpenter (Ocean Springs) sent the Wildcats on another run with two service aces coupled with an Overstreet kill to extend the lead 12-3.

Despite a late attempt by the Blazers, Bartholomew sealed things with a thundering kill to win set five and complete the Wildcat comeback.

The Wildcats hit the road on Thursday to take on Gadsden State. The match is set to get underway at 5 p.m.