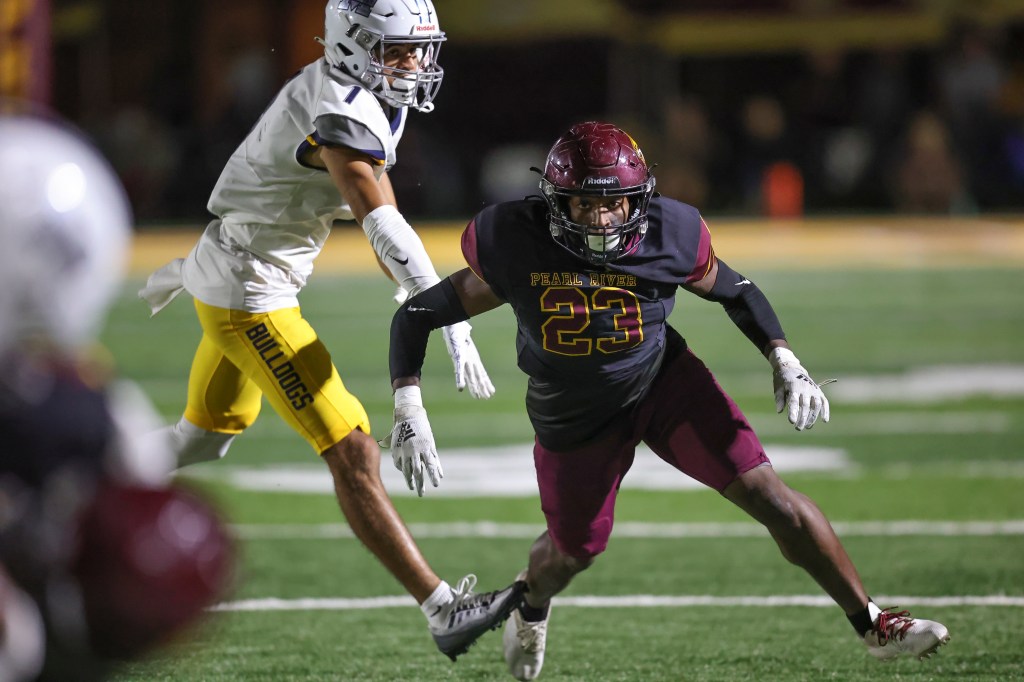 SUMMIT, Miss. — It was a back-and-forth battle all the way to the very end, but the Pearl River football team secured a 31-21 come-from-behind victory over Southwest Saturday evening. The win gave PRCC its first winning season since 2017.

“I don’t care if every win is ugly, winning in this league is exhausting,” Pearl River coach Seth Smith said. “I’m super proud of the kids and how hard they played. You don’t win this game if they don’t fight. That’s why we won. I’m so grateful and so thankful for this win.”
With the victory, Pearl River remains in the hunt for a playoff appearance. The Wildcats need one more victory as well as a Gulf Coast loss to secure a berth.
HOW IT HAPPENED
Pearl River (5-3 overall; 3-2 MACCC South) received the opening kickoff and quickly drove down the field to get into the endzone. Lawson Pratt (Tuscaloosa, Ala.; American Christian Academy) found Antonio Gayden (Harvey, La.; West Jefferson) sprinting across the middle for a big pickup of 32 yards. The Wildcats worked down to the Southwest (2-6; 1-5) 13-yard line and on the next play, Pratt connected with Marquis McCoy (Crestview, Fla.) for a touchdown.
After a good return by the Bears, SMCC needed just five plays to get into the endzone and even the score 7-7.
The teams traded punts for much of the rest of the first half before the Wildcats used a 10-play, 70-yard drive to get into the endzone with just 20 seconds remaining. PRCC picked up 21 yards on the third play of the drive as Pratt found Christopher Holifield Jr. (Mobile, Ala.; LeFlore) in the middle of the field. PRCC finally punched it into the endzone with a connection between Pratt and Gayden. Gayden dashed off the line of scrimmage, beat his defenders and caught a pass in the right side of the endzone to give the Wildcats the lead. A Michael Owens (Hattiesburg; Oak Grove) extra point made it 14-7.
Southwest tossed a 59-yard touchdown pass with 12:17 left in the third quarter to even things right back up at 14-14.
The Bears forced another Wildcat punt soon after and promptly drove into PRCC territory. The defensive unit again held strong for the Wildcats as Justin Jefferson (Memphis, Tenn.; Bartlett) and Caleb Williams (Biloxi; D’Iberville) stopped SMCC just short on a fourth down attempt.
PRCC drove deep into Bear territory on the following drive but couldn’t get into the endzone. Owens trotted out and nailed a 26-yard field goal to give Pearl River the lead right back, 17-14.
Southwest turned in an impressive drive in the early portion of the third quarter, driving 99 yards on just four plays to take its first lead of the day 21-17.
Pearl River roared right back on its next drive. The Wildcats set up the screen perfectly on the second play. Pratt faked a handoff to Qavonte Swanigan (Foxworth; West Marion) who leaked out to the right side of the field behind his blockers. Pratt turned and flipped a pass over to him and Swanigan dashed 57 yards down the field before being tackled. After a few negative plays and a few penalties, PRCC looked like it was in trouble as it faced a fourth-and-15 situation. Pratt tossed a pass to the endzone for Holifield Jr. who was dragged down for a pass interference and a new set of downs. A few plays later, Nick Milsap (Raleigh; Oak Grove) fought through a few defenders and scored from three yards out to put PRCC ahead 24-21 with 3:15 remaining in the game.
Williams came up massive down the stretch of the contest. The SMCC quarterback dropped back to pass, and Williams read it all the way, jumping the route to pick off the pass. Pearl River attempted to run out the clock but eventually turned over the ball at the Southwest 3-yard line.
On the very first play of the drive, Williams struck once again. Bryan Whitehead II (Bartlett, Tenn.) came flying off the line of scrimmage to hit the SMCC quarterback as he let go of the pass. The ball flew through the air and Williams swooped in, intercepted the pass and easily took it 20-yards for the score. The pick-six gave Pearl River a 31-21 lead.
“Caleb Williams is just a dog,” teammate Elijah Jenkins (Picayune) said. “You practice how you play. If you only saw the way that this guy practices, you’d expect this every time. I’m really proud of him and my guys overall.”
LEADING THE WAY
Pratt had his best performance of the season in the game, finishing 19-for-29 for 226 yards and two touchdowns.
Holifield Jr. led the team in receptions with seven for 43 yards. Gayden led the team in receiving yards, bringing in six passes for 101 yards and a touchdown.
Milsap carried the ball 29 times for 101 yards and a score. It was his second 100-yard performance in a row.
Defensively, Williams tallied seven tackles, one tackle-for-loss and two interceptions. Eli Hackbarth (Birmingham, Ala.; Oak Mountain) had five tackles in the contest.
NEXT UP
Pearl River returns to action Thursday for its regular-season finale against East Central. Kickoff inside of Dobie Holden Stadium is set for 7 p.m. The game will serve as PRCC’s sophomore night and will also be the annual pink-out game. Paint the Town pink will have a booth, taking donations for the organization.